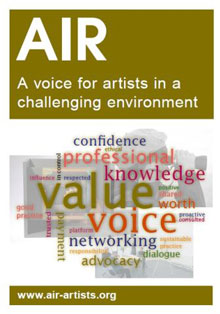 Thanks to Katriona Beales for passing this on, I see Emily Speed and Kay-Oi Jay Yung are involved too. Is Liverpool now the home of radical art activists?

AIR – Artists Interaction and Representation today launched Road map to artists’ representation, setting out its framework for representation, designed to provide an effective voice for visual and applied artists in a challenging environment.

With over 14,500 members, AIR is now the largest-ever membership body for visual artists. Surveyed in 2009, 90% of its members confirmed they wanted AIR to “lead campaigns for increased representation of artists’ concerns to government and policy-makers.”

The AIR Representation framework will provide transparent and open channels for communication and interaction, identifying and prioritising campaigns and facilitating elections to the AIR Council.

Low levels of remuneration and lack of status within in arts decision-making are already of great concern. AIR’s research has revealed that as some 72% of artists are self-employed they have been badly affected by the recession and continued economic downturn. According to analysis by leading UK visual arts organisation a-n The Artists Information Company, the value of openly-offered paid work for artists is down 27% on pre-recession figures.

Forthcoming cuts in levels of university staffing – the largest employer of artists – and swingeing cuts at Arts Council England and Arts Council of Wales herald tough times ahead, not only for the 3,800 new art and design graduates joining the profession this summer but for all artists seeking to operate professionally and work to a high standard. AIR will thus seek to represent its members’ interests and concerns across the wide spectrum of arts enablers and employers, recognising the diverse practices and aspirations within contemporary visual artists’ development.

As artists Steven Paige and Rebecca Weeks comment: “Representation…translates the worth attributed to artists into a process that harnesses their skills and knowledge and allows it to be translated into policy, philosophy and action”.

Launched alongside is AIR Activists – a national network for artists’ self-representation, designed to give many artists the support and opportunity to represent artists and their professional needs and concerns to others.  Supporting the initiative, AIR founder-member and artist David Cotterrell said: “AIR is about creating solidarity amongst artists, now and in the future.”

AIR’s representation launch is aided by April Britski, on secondment to AIR from her role as Director of CARFAC – Canadian Artists Representation. A member of ECA – European Council of Artists, AIR seeks to work in partnership with existing artists organisations including Scottish Artists Union and Visual Artists Ireland, to create a coherent and persuasive voice for artists across the UK and within Europe.