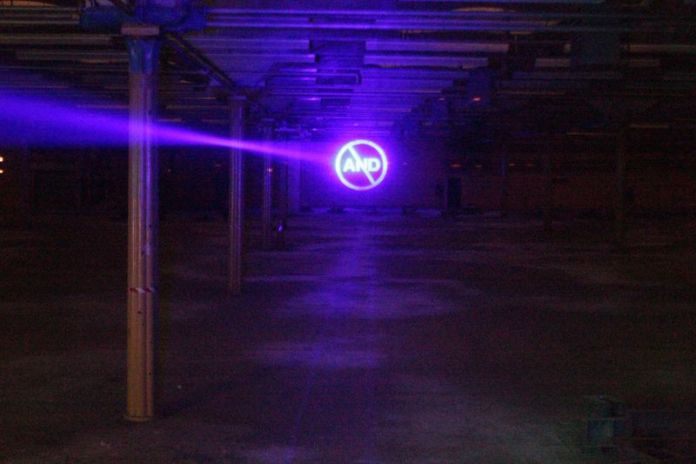 Abandon Normal Devices (AND) is a dynamic festival of ground-breaking art, digital culture and new cinema, taking place in Liverpool between 3-5 October 2013, hosted by FACT (Foundation for Art and Creative Technology).

Now in its 5th year, this year’s programme is an exciting foray into current artistic and cinematic practice, focusing on artists who make the impossible possible. Blurring the boundaries between art, science and cultural activism, the projects showcased will render a whole series of politically charged views that provide commentary on issues as diverse as modern defence tactics to special effects.

This year marks a departure from the usual format of previous years with a week long programme of ateliers – training for artists by artists – followed by a 3 day exposition of performances, debates, live events and more.

New to the festival programme this year will be the AND Fair on Saturday 5 October, which will play on the format of the World Fairs of old, inviting artists to demonstrate both the fantastical and the primitivism of new technologies, with projects as diverse as optical illusions, flying machines, biological probes and computer algorithms.

The four ateliers are

Major commissions this year include

In collaboration with The Arts Catalyst, the spectacular SEFT-1 is a road and rail vehicle created by Mexican artists Los Ferronautas. Designed to hijack tracks and traverse natural landscapes, the vehicle functions as a research device and has already journeyed along the abandoned railways of Mexico and Ecuador. The vehicle’s premiere UK expedition will begin in September with a month-long canal side residency in Blackburn, where Los Ferronautas will experiment with how to make the vehicle buoyant for future expeditions on waterways.

From yu to me is a short film by artist Aleksandra Domanovic which documents the history of the internet in former Yugoslavia and how a prevailing number of internet pioneers in the former Yugoslavia were women (female scientists), and how that balance shifted to the male during the massive privatisation era.

In the world premiere of filmmaker and artist Mark Boulos’ new immersive video installation Echo at FACT, viewers will encounter a ‘reflection’ of themselves transposed within the fast-moving traffic of an unfamiliar city. As the viewer continues to observe their doppelgänger it becomes increasingly de-synchronised, its voice an echo and the surrounding buildings and streets, stretching, and distorting. The work combines scientific research with innovative camera techniques, including Hitchcock’s vertigo inducing ‘contra zoom’ and special effects based on the illusion ‘Peppers Ghost’ to produce an unsettling personal experience. This new commission inspires a supporting film programme and symposium. Echo was commissioned and produced by Forma in partnership with FACT, development and presentation supported by The Wellcome Trust and presented as part of Abandon Normal Devices 2013.

Programme of films and screenings

A selection of feature length and short films that look at life on film and the limits of the archive to obsolete technologies and ground-breaking digital tools. The films featured in AND will range from rarely seen early stereoscopic Soviet 3D animations to the award winning documentary, Leviathan. A thrilling, immersive journey that takes you deep inside the dangerous world of commercial fishing, employing an arsenal of cameras that pass freely from film crew to ship crew, and swoop from below sea level to astonishing bird’s-eye views.

AND has been funded by Legacy Trust UK, creating a lasting impact from the London 2012 Olympic and Paralympic Games by funding ideas and local talent to inspire creativity across the UK.  AND 2013 film programme has been supported by the BFI’s Film Festival Fund, which supports festivals to bring a diverse range of films to audiences across the UK.