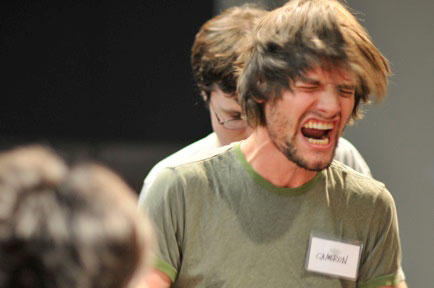 This year’s festival will work with local artists, volunteers and businesses to take art onto the streets, into clubs, cafés and hairdressers, and to the visionary edges of arts, film, science and belief.

The 2011 AND Festival sets off in September for a tour of the North West, taking in fairs and markets in Cumbria, Cheshire and Lancashire before arriving in Liverpool where FACT (Foundation for Art and Creative Technology) will act as festival hub.

SELECTED HIGHLIGHTS:
Various artists – Ropewalks interventions
As well as staging events and exhibitions at Liverpool’s well-known art institutions, AND festival will be turning the area around Bold Street into a hive of artistic activity. Interventions include Stephen Fortune’s ‘Data Divination’ at café hangout Leaf, Oreet Ashery creating an army of Ringo Starr lookalikes with the help of hair stylists Voodou for Him, and a chance to have a tattoo designed by British visual artist David Shrigley.

John O’Shea – ‘Pigs Bladder Football’
Pigs Bladder Football sets out to revive the medieval process of making footballs from pigs bladders, with the intention of manufacturing contemporary “organic footballs” to be used in the beautiful game. Following a trial kickabout in Egremont in Cumbria earlier this year, Pigs Bladder Football will be recruiting Liverpudlians of all ages to try to uncover the primal origins of our national game.

Brody Condon – ‘Level Five’
UK PREMIERE
Level Five is a live role-playing game hosted by Bluecoat and inspired by the selfhelp initiatives of the 1970s. Up to 75 players, drawn from a pool of volunteers, must live out the lives of their characters in a physically and psychologically
demanding piece of theatre that will stretch over 16 hours. Only participants will be admitted in to the performance space itself, with live footage streamed for the public.

Kurt Hentschläger – ‘Zee’
UK PREMIERE
As one eyewitness put it, “it is really hard to say something smart about something so sensual”. Variously described as “insane”, “like entering Heaven” and like being on another planet, ‘Zee’ is an installation of fog, light and sound that will turn FACT Gallery 1 in to an out of body experience. An installation “like death” that nevertheless has audiences coming back again and again.

Ahmed Basiouny – ’30 Days Of Running In Place’ / Zhang Qing – ‘The People’s Secretary’
Continuing to 28 November along with ‘Zee’ (above), FACT Gallery 2 welcomes the work of two video artists who have stood up to the system in their respective countries, Egypt and China. Both artists will resonate with Liverpool’s own history of political agitation, Basiouny’s work being all the more poignant as he was shot dead during the January 2011 Egyptian uprising.

AND is presented by Cornerhouse (Manchester), FACT (Foundation for Art and Creative Technology) (Liverpool) and folly (Lancaster), and is an innovative new festival of arts and cultural debate for the Northwest.
Offering a high calibre and energetic programme, Abandon Normal Devices 2011 will sprawl across and out from Liverpool’s cultural spaces. The festival is funded by the Legacy Trust and is part of WE PLAY, the Northwest cultural legacy programme for the London 2012 Olympic and Paralympic Games.
Further programme confirmations, venues and special events will be announced in the coming weeks at www.andfestival.org.uk

Art For Macmillan: The Struggle To Get Those Vacant Properties...