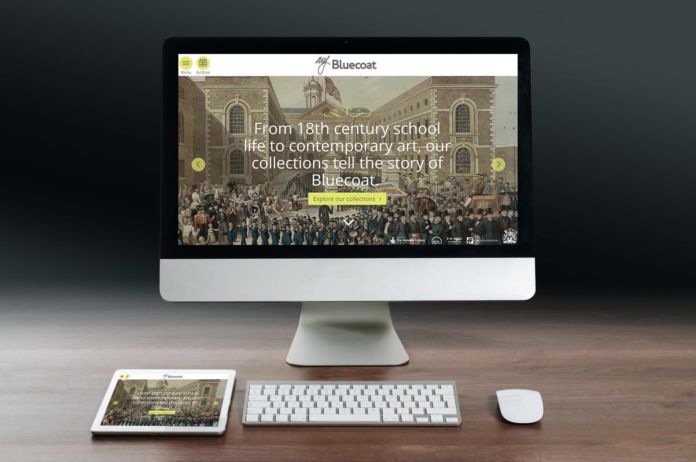 Bluecoat, Liverpool’s centre for contemporary arts, is launching a new online archive, giving people access to its 300-year history via documents, photographs and film. My Bluecoat, contains the earliest record of the building in 1717 and brings it up to date with details of its current arts programme.

Developed in partnership with Liverpool Record Office at Liverpool Libraries, and the Liverpool Blue Coat School in Wavertree, where the original charity school relocated to in 1906, the new archive is a legacy of Bluecoat’s heritage participation project in 2017, funded largely by the Heritage Lottery Fund, which comprised a year-long programme of exhibitions and events celebrating the building’s 300th birthday.

Compiled by staff and volunteers, the archival material, which dates back to the building’s dedication as a charity school for poor children in 1717, charts the Bluecoat story – its transition from charity school in the 18th century to a pioneering arts centre in the 20th century. The website paints a vivid picture of a building that has been at the heart of Liverpool culture for three centuries.

The My Bluecoat archive includes rarely seen photos, documents, journals, account books and other material. Freely accessible, it provides a treasure trove for academics, artists, schools, students and anyone with an interest and passion for Liverpool and the role of an arts centre in the heart of a city. It includes;

* A personal account by master mariner Bryan Blundell of his founding of Bluecoat, along with early documentation and engravings

* The Bluecoat Society of Arts’ constitution from 1927

Also included is documentation of some of Bluecoat’s performances and events from the past fifty years, including a memorable gig by jazz legend Sun Ra, as well as more recent interviews with artists and curators. A 1965 audio recording of an interview with Liverpool sculptor, Herbert Tyson Smith, has been digitised for the site, offering a fascinating insight into the life of an artist who was associated with the building for over half a century and exhibited there alongside Picasso in 1911.

Bluecoat Artistic Director, Bryan Biggs, who is leading on the project, says: “2017 demonstrated a public appetite for the heritage of the Bluecoat building, both its history as a school and its contribution to the arts. We hope that this website will have something for everyone who visits it. It will enable us to continue researching our history, while maintaining an active resource for sharing information and stories.”

The site allows people to write and submit their own stories, helping to build up a collection of narratives from a wide range of perspectives, to sit alongside Bluecoat’s own. As well as this, curated collections will be selected from the wealth of material available, and Bluecoat will be working with guest curators on their own special collections.

Bluecoat Chief Executive, Mary Cloake says: “We are keen to hear from visitors and artists who have worked here, workshop participants, former tenants and anyone else who has a story to share. They may have anecdotes about a relative who studied at the school, or have a poster from an event, a photograph or other material they’d like to contribute to our archive.”

Visitors to the My Bluecoat website can explore collections, which have been selected around themes that include the charity school, Bluecoat’s architecture, its popular garden, and its performance and exhibition histories. One collection contains a selection of images from the gallery exhibitions, while another features 200 posters.

There is also a search facility, so that a specific exhibition, an artist, or an event relating to the school, for example, can be found.

The archive also contains behind-the-scenes images, revealing some of the activity in the arts centre that has less visibility, such as its long-running programme with learning disabled people, Blue Room, whose members have selected a collection for the website, through which to tell their story.

Also on the menu are 300 Facts about Bluecoat, which have been adapted from daily tweets during 2017, as part of the tercentenary programme. These snippets of information reveal facts – often unexpected – from Bluecoat’s history, recounting events like the Second World War bombing, or famous artists Bluecoat has welcomed, like Stravinsky, Yoko Ono and Captain Beefheart.