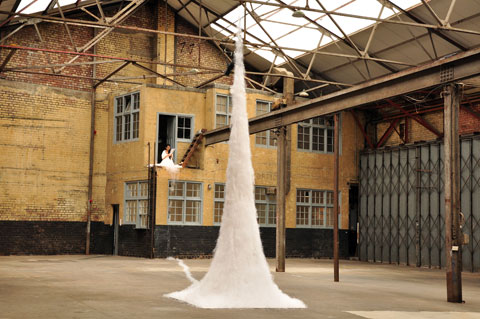 This has been rumoured for a few months, now we have confirmation that A Foundation has closed.

See the press release from Mark Waugh below. It’s a great shame, there’s been so many fantastic exhibitions there, most recently the wonderful Sachiko Abe and Antti Laitinen for the 2010 Biennial. I also remember some cool events and parties there too.

I do hope the buildings somehow continue to be used for art, it’s been a major part of the new Baltic Creative quarter. If I remember right, James Moores owns the buildings and in 2008 he committed to keeping them for quite a few years (at the time there were incorrect rumours they’d been sold off to property developers). But the organising of exhibitions, residencies, events etc. which the A Foundation did is a separate thing which needs sustainable funding and management – not a simple task at all. Good luck to whoever takes it on.

Check out the article and debate on the Seven Streets website.

From A Foundation’s Mark Waugh

Thanks for the support. A Foundation will miss Liverpool.

Here is the press release which confirms the closure of A Foundation on 10th February 2011.

A Foundation is “not sustainable in either the long or the short term.” This was the judgement made by Arts Council England rejecting an application towards 33% of our costs in Liverpool for 2010 – 2011. Therefore A Foundation is closing.

We’d like to thank our staff, audiences and funders for their support of this extraordinary achievement. Important work by post-war artist, Peter Lanyon, acquired by the University of...