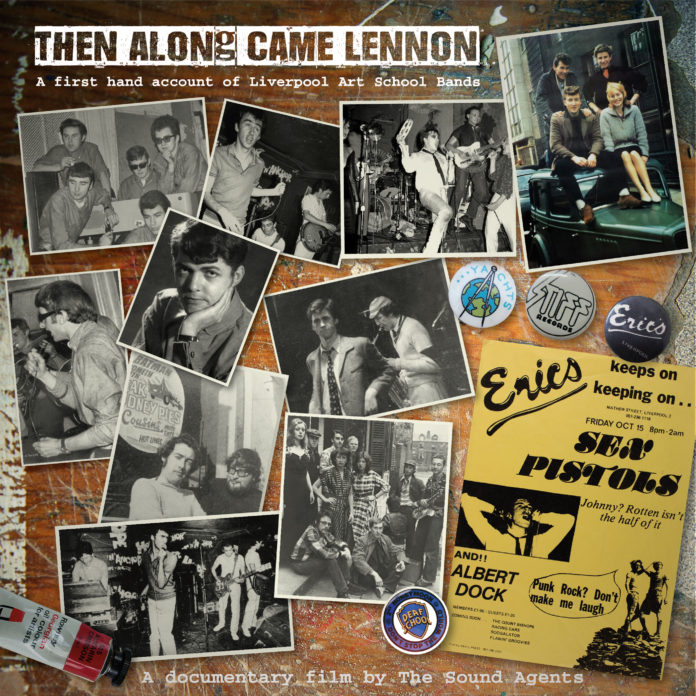 Artists and oral historians, The Sound Agents, have secured a grant of £10,000 from The National Lottery Heritage Fund to make a documentary uncovering the hidden histories of musicians who attended Liverpool Art School from 1955 to 1980. From poets to punks, the film will chart the significant impact the School has had on the UK’s youth and popular culture.

The film will explore the pivotal role of Art Schools as free-thinking and diverse environments, providing an insight into the relationships between art and music and capture personal memories of John Lennon and Stuart Sutcliffe before they left for Hamburg with the Beatles.

Director, John Campbell of The Sound Agents explains: “Drawing upon Liverpool’s rich heritage of music and utilising the great connections to John Lennon and Stuart Sutcliffe, we will be recording the personal journeys of artists from the days of Junior Art School in Gambier Terrace, through to their time at Liverpool College of Art and Liverpool Polytechnic. The oral histories will reveal the lives of Al Peters and his days at Abbey Road Studios; founder of Mersey Beat, Bill Harry’s friendships with John Lennon and Stuart Sutcliffe; accounts of poets Roger McGough and Adrian Henri teaching on Foundation courses;, and tales of Albert Dock being the house band at Eric’s where they supported the Sex Pistols before signing to the iconic punk label Stiff records. Our research to date has uncovered stories of life-changing impacts, international success and contemporary cultural contribution that has never before been revealed or documented”

Although focussed on Liverpool, The Sound Agents will record the story of The Klubs, a band formed in Birkenhead laird School of Art who were the house band of the renowned music venue The Cavern and had a big following in the city and Doreen Allan owner of Planet X nightclub and who worked on the door at Eric’s music club on Matthew Street.

Artistic Director Moira Kenny of The Sound Agents illustrates the importance of preserving the musical legacy of Liverpool Art School Bands, especially today as many cultural subjects in schools are no longer available.

“This project is an opportunity for real change and will showcase how important the arts are for people to have greater well-being and access to creativity from a young age. The artists we are interviewing have spent their entire lives working in the creative sector. We want to lead a change of ideas and actions to protect and preserve the arts in schools”

There is also a personal reason for John Campbell to record this film as he attended Liverpool Polytechnic formerly Liverpool College of Art in the 1970s. He was drawn to the city from Manchester influenced by the Liverpool poets; Roger McGough, Adrian Henri and Brian Pattern.

He explains, “The day I walked in to the Art School I met Henry Priestman who had come to Liverpool from Hull to be a musician. In those days performing art schools such as the Liverpool Institute for Performing Arts (LIPA) founded by Paul McCartney in 1996, did not exist.”

Together they went on to form bands Albert Dock in the Punk era and British power pop/new wave band Yachts best remembered for their 1977 classic single ‘Suffice To Say’.

Kevin McManus, Head of UNESCO City of Music, said: “I wholeheartedly endorse the value of such a documentary and the ability of the organisation to deliver a high quality project. The British Music Experience (BME), the only national museum of rock and pop in the UK, which is based here in Liverpool would be the ideal place to screen the documentary and any supporting events.”

The documentary will be shown at the BME with a Q & A led by Research Consultant Professor Colin Fallows, Liverpool John Moores University (LJMU) and at the Museum of Liverpool June 2020.

This project is an opportunity for local archive services to augment their holdings relating to an area of popular culture and its interaction with education, health, politics and social issues, which has historically been under-represented.

To acknowledge the support and thanks to the people who play the National Lottery, The Sound Agents will be holding a raffle at their events at British Music Experience and Museum of Liverpool with the winning prize of a lottery ticket for the following Saturday evening draw. The Sound Agents explain “Without the support of people who play the Lottery we would not be able to make this film”

Simon McKeown is DaDaFest Artist of the Year