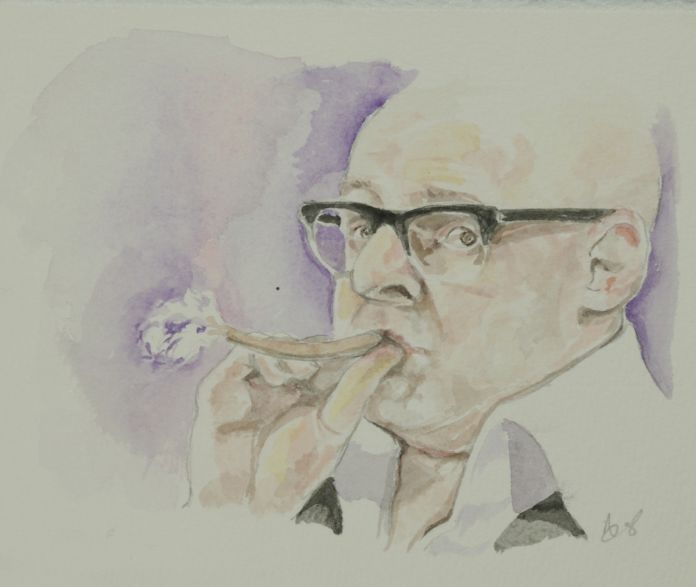 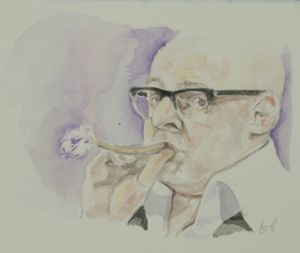 This exhibition is the home-coming for Wigan artist Anna FC Smith after its London premiere. The show is a culmination of a year-long Arts Council England funded project in which Anna FC Smith has been
exploring Harry Hill’s TV Burp as a configuration of European Carnival (1300-1700). The Wigan show is supported by Cross Street Arts, Standish and Wigan Council.

In this exhibition of watercolours, drawings and mixed folk media work, Smith has sought to define and spotlight components of TV Burp using a combination of ethnographic methods (drawing and watercolours) and selected folk media (papier-mâché sculptures, knitted works, thimbles and clay character pots). By creating these ethnographic studies and new folk artefacts, Smith invites us to re-examine the context in which we view TV Burp. The knitted works are based on characters from TV Burp mini series The K Factor and were created by local Wigan knitters from Beech Hill Book Cycle Knit and Natter group and knitters from Wigan Library Craft and
Chat.

Accompanying the exhibition there is a book of essays comparing the activities on the television programme, Harry Hill’s TV Burp, with the historic phenomena they relate to.

‘BURPology – Harry Hill’s TV Burp  As Carnival’ is curated by Nathalie Boobis with curatorial assistance from Jo Guile. The show premiered in London at the Coningsby Gallery in January.

A bit more news from Warrington

Summer of Love moves to Frankfurt

Tell me a story