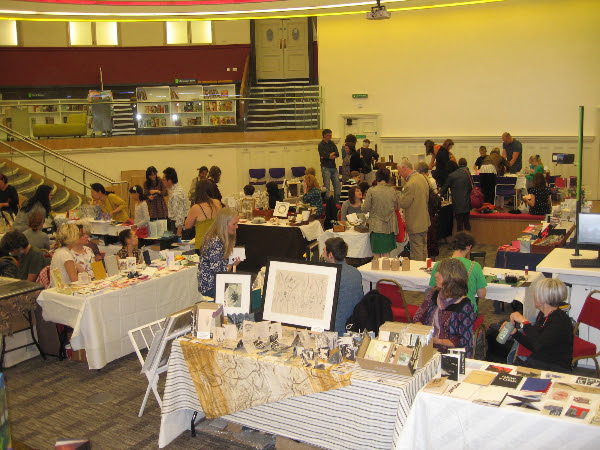 Liverpool Book Art celebrated the success of the second Artists’ Book Fair, held at Liverpool Central Library on 4/5 July 2015.
On the Friday the fair was boosted by visits from members of the Chartered Institute of Library and Information Professionals who were attending their annual conference next door at St George’s Hall. The Institute’s President visited the book fair’s “The Lost Dictionary” performance, and used the world she ‘discovered’ there in her address to the conference.

Saturday was action-packed, with performances and children’s workshops complementing the fair. A steady stream of enthusiastic visitors didn’t let up until the Library closed at 5 p.m.

Liverpool Book Art’s founder and former Chairman of The Bluecoat, Simon Ryder said “I’d like to thank everyone who made this year’s Artists Book Fair such a success – all the artists at the Fair with their fantastic work, the performers, my terrific volunteers at the welcome table, Kate Bufton for the children’s workshops, and not forgetting all the Library staff.”

Next year’s fair will take place on the 8th & 9th July, 2016 to coincide with the opening of the Liverpool Biennial, alongside a major exhibition of Artists Books throughout June & July to mark the 400th anniversary of William Shakespeare’s death.

Tate Liverpool reopens next week with new and extended exhibitions