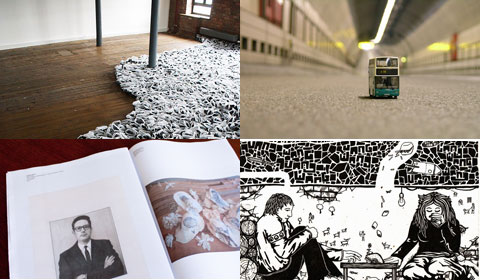 Local artists Alan Dunn, Tomo, Robyn Woolston and The Drawing Paper’s Jon Barraclough and Mike Carney have been revealed as the shortlist for the 2012 Liverpool Art Prize, when it returns for its 5th successive year in 2012.

All four will exhibit their work at Metal, based at Edge Hill Station, Liverpool, from Fri 27 April – Sat 9 June in the hope of winning the prestigious prize, which was established in Liverpool’s Capital of Culture year 2008.

The shortlist was whittled down from the 48 entries received by the organisers following an open call for nominations.  The highly qualified panel of judges, which this year comprises of; Mike Stubbs, CEO and Director of FACT, Laura Davis, Arts Editor of the Liverpool Daily Post, Sook-Kyung Lee, Curator at Tate Liverpool, and last year’s winner artist Markus Soukup, with Ian Jackson of ArtinLiverpool.com  as chair.  The shortlisted artists will need to continue to impress the panel with the work they exhibit in order to win. The winner will be revealed at an awards ceremony on Wednesday 30 May at which the People’s Choice Award winner will also be revealed.   Further details on what the winners will receive will be released in the New Year.

Tomo’s work can be seen as a kind of storytelling through the materials he uses. The work is informed by a strong DIY ethic and he strives to make the best he can with whatever is available, often working with discarded items.

Robyn Woolston’s practice involves installation, photography, moving image, print and on-line projects.  She is passionate about people, relationships and the way the world works.  This is reflected in her work, which raises questions concerning social, economic and ecological perspectives.

Members of the Royal Standard studio, Jon Barraclough and Mike Carney curate, design and publish The Drawing Paper, a not-for-profit, independently published, newspaper-based gallery focussed on contemporary drawing practice. It is distributed freely around selected galleries and establishments in Liverpool, the UK and beyond.  They have published four issues since 2010 and continue to provide a platform for local, Liverpool based artists, exposing their work to a much wider audience, as well as linking other artists up with one another.

The Liverpool Art Prize is a competition of contemporary art, which was inspired by the Turner Prize and began in 2008. It is open to all professional artists based or born in the Liverpool City Region or in the surrounding boroughs of Liverpool, Wirral, St Helens, Knowsley, Halton and Sefton.

Previous Liverpool Art Prize winners are Imogen Stidworthy, AL and AL, David Jacques and Marcus Soukup, who will soon exhibit at the Walker Art Gallery as part of his prize in 2012, in addition to judging the 5th Liverpool Art Prize. The previous People’s Choice winners are James Quin, Brendan Lyons, The Singh Twins and Elizabeth Willow, who have also gone on to achieve great respect within the industry.  2011 People’s Choice winner James Quin has just finished exhibiting at Metal as part of the Edge Hill Archive project. More details about what each prize will entail will be released in the New Year.

Ian and Minako Jackson of ArtinLiverpool.com, who conceived of the art prize said“We are thrilled with this exciting shortlist of artists for the fifth Liverpool Art Prize. The panel of judges have gone through a tough selection process to pick 4 artists, consisting of a mix of emerging and established artists.  As in previous years there is an eclectic combination of practices which should make for another fascinating exhibition. We are really looking forward to the exhibition opening in April 2012 at Metal at Edge Hill Station.”

Jenny Porter, Project Manager at Metal and curator of the Liverpool Art Prize exhibition said; “The judges have done an excellent job this year of choosing four diverse and extremely talented artists as finalists for this, the fifth, Liverpool Art Prize.  We’re really excited to be involved again and are working hard to make this year’s prize the centre of a variety of creative activity from Liverpool based artists.  I can’t wait to start working with the artists to see what ideas they’ll have for the buildings at Edge Hill Station.”