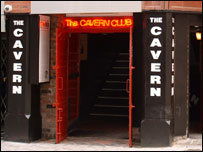 So the Cavern is 50 years old today.

There’s lots about it on the BBC Liverpool webpages

The world’s most famous rock and roll club, Liverpool’s The Cavern celebrates its 50th birthday on Tuesday 16 January 2007.

The Beatles played at The Cavern 292 times and it was during one of their lunchtime sessions at the club that they were first seen by their future manager Brian Epstein.

The Cavern, named by owner Alan Synter after a Paris venue ‘Le Caveau’, opened on Wednesday 16th January 1957. The club began life as a Jazz venue, the first act was Merseysippi Jazz Band, and for three years the club would mainly feature jazz artists.

The Beatles first promoter Sam Leach recalls that The Cavern, because of its jazz associations was one of the last Liverpool clubs to feature beat music; “It makes me smile when you read ‘The Cavern where it all began’. They were the last ones in.

Vocal Play: workshops for voice only