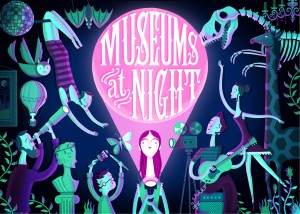 Museums at Night, the annual night-time festival of arts, heritage and culture, will take place this year over the weekend of Thursday May 15 – Saturday May 17, 2014.

Over three nights in May, during which time hundreds of museums, galleries and historic spaces all over the UK will open up late and putting on a dazzling array of special night-time events: from unique literary talks in castles to star gazing in historic houses; sleepovers in palaces to city-wide culture crawls; bands playing in amongst museum exhibits to science fiction life drawing in galleries. The Museums at Night festival offers the chance to experience culture and heritage in a totally unexpected way.

In Liverpool on May 16, Light Night will see over 50 city centre museums and galleries opening and staging over 100 special cultural events. Highlights include the opening night of ‘The Vanity of Small Differences’ by Turner Prize-winning artist Grayson Perry at The Walker Gallery. There will also be light projections taking place across the city and vibrant mix of special events, walking tours, exhibitions and participatory workshops.

Some of the Museums at Night highlights in Liverpool include:

Events are being added on a daily basis but full listings for Museums at Night can be found at www.museumsatnight.org.uk.  For up to the minute news on Twitter follow @MuseumsatNight #MatN2014

TALK: The Collectors Salon at A Foundation