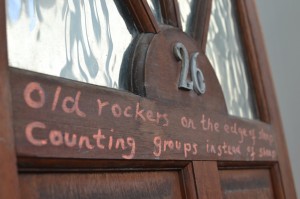 Poetry Society President Roger McGough brings to the new Museum of Liverpool a unique art installation combining his poetic skills and love of his home city.

The Liverpool Doors exhibition will feature doors from across the city, donated to Roger and book artist Mark Cockram, who have created the installation along with students from Liverpool John Moores University’s (LJMU) School of Art and Design.

Opening on 25 February, this will be the first new exhibition to be staged at the Museum of Liverpool since it was fully opened to the public by The Queen and The Duke of Edinburgh in December 2011.

Bill Longshaw, Curator of Community History said: “About 12 months ago, we invited Roger to contribute something special to our displays and he came back to us with a great idea for an exhibition, which demonstrated exactly what the Museum of Liverpool was about.

“Roger and Mark engaged with the local community to explore the history of the city through stories and memories symbolised by these doors. They were collected following a public appeal. People and businesses from across the city responded so you will find all manner of places represented, with a sprinkling of Roger’s wonderful poetry to top it off.”

The exhibition features over 25 doors including those from the original Everyman Theatre and Bistro, Strawberry Fields Children’s Home, Liverpool sculptor Arthur Dooley’s studio, the Trophy Room door from Liverpool Football Club and a turnstile door from Everton’s Goodison Park.

Roger said: “It has been a hugely rewarding experience to work alongside Mark and a group of enthusiastic and talented art students, and the project has provided me with the opportunity to be playful and present poetry in a vibrant and visual way.”

LJMU’s Art and Design students have used the doors as canvasses for extracts from Roger’s poems, using creative designs for the words themselves as well as imagery and objects to illustrate the poems, such as model cars, football socks and photographs. They have been supported by Roger and Mark throughout the artistic process, which began in November last year.

Professor Juan Cruz, Acting Director of LJMU’s School of Art and Design said: “This has been a fantastic opportunity for the students. We were delighted when Roger and Mark approached us to say they would like to work with the University.

“In addition to creating a lasting legacy which will be viewed and admired by many people for years to come, the students have gained invaluable insight into creating an installation for a national museum, developing real world skills which are essential in a time where competition for jobs is increasingly fierce.”

Also featured within the exhibition, will be a bound copy of the entire Liverpool Saga: an 800 line poem written by people from across Merseyside to celebrate Liverpool’s 800th birthday. Roger wrote the opening and closing verses of the Saga, which specialist book artist Mark Cockram has bound specifically to accompany the Liverpool Doors exhibition.

‘What Makes a Scouser’ – Debate at WML

Walker Pictures of the Month – October 2005