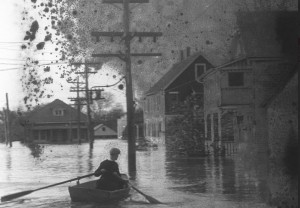 The Mississippi River Flood of 1927 was the most destructive river flood in American history. In the spring of 1927, the river broke out of its banks in 145 places and inundated 27,000 square miles to a depth of up to 30 feet. Part of it enduring legacy was the mass exodus of displaced sharecroppers. Musically, the “Great Migration” of rural southern blacks to Northern cities saw the Delta Blues electrified and reinterpreted as the Chicago Blues, Rhythm and Blues, and Rock and Roll. Filmmaker Bill Morrison and composer / guitarist Bill Frisell have created a powerful portrait of a seminal moment in American history through a collection of silent images matched to a searing original soundtrack.

Commissioned as part of a residency at the North West Film Archive for AND Festival, Noah’s Ark uses only films from the archive collection to retell this classic tale of preservation. The film relocates the story to the North West – with Noah and his congregation based in a church in Hulme, the animals in Belle Vue Zoo, and Mount Ararat now a seaside town near Blackpool. The film will be presented in the Living Worlds gallery (which also features in the piece) with a live performance from poet Nathan Jones of Mercy.

EVENT: The Ballad of Juniper Davy and Sonny Lumière

STARTS: “The Other Shanghai” by Ant-e-Art

A Christmas Fair of Craft and Vintage Ware