Liverpool Biennial and Dutch artist Jeanne van Heeswijk are developing a new project to work with a group of around 40 young people in the Anfield/Breckfield area. Over the next eighteen months together they will design and build a small housing unit for two to four households in the community which will be set up as a self-build/collective ownership model. During the course of the development the young people (aged 12 to 25) will acquire a range of skills from design and construction to planning and communication and form the core of the project workforce.

Why shouldn’t more people be able to build their own dream?
Grant Shapps, 3 May 2011
At the launch of the Grand Designs Exhibition in London in May, Housing Minister, Grant Shapps declared his particular interest in community self-build, describing it as ‘people getting together to build their own homes’ at the same time as learning a trade that may lead to them getting a job.
Arena Housing and Liverpool City Council are supporting just such an initiative, called 2Up 2Down, led by Liverpool Biennial in Anfield/Breckfield.
Everyone who lives and works locally or is interested in the project is invited to attend the launch of the project hub at the former Mitchell’s Bakery, 199 Oakfield Road, L4 0UF on Friday 24 June, 12.30pm – 4pm. It is an opportunity to have a look at the plans for 2Up 2Down, as well as an exhibition of design & film work and to ask questions as part of a discussion, with refreshments provided.
The hub will be opened by Cllr. Ann O’Byrne (LCC Cabinet member, Housing) at 12.30pm. Between 12.30pm and 2pm, artist Jeanne van Heeswijk will be in discussion with Torange Khonsari of Public Works and Mark O’Reilly, Renewables Adviser of CYNTRA Ltd, about the sustainable approach to house building. At 3pm there will be a building design workshop for all ages, all welcome.
More Details 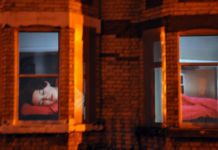 Review of the Jamaica St

The Cooperative – Message from the ghetto by Ben Egerton