Home Venues Archives Bluecoat Archive LightNight Projections Announced at the Bluecoat and Metropolitan Cathedral
Share
Facebook
Twitter
Pinterest
WhatsApp
16 May 2014
21.30
Free
For LightNight, two light projections will shine a spotlight on two beautiful buildings; the Bluecoat, the oldest Grade 1 listed central Liverpool building and the striking portland stone Bell Tower of the Liverpool Metropolitan Cathedral. The two dazzling projections will pay tribute the centenary commemorations of World War One, and in particular how the war was seen and reported on the Home Front.
The First World War was the first total war, with the whole nation mobilised to fight. Men joined the army while women took over their jobs. The government asked for 100,000 volunteers, but got 750,000 in just one month. The projections convey the sense of optimism for the war through archive photographs, postcards, newspapers and more. 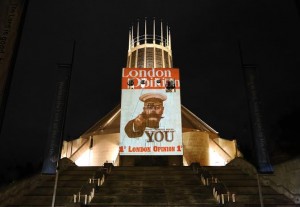 The light projections will be accompanied by the voice of David Charters, the Bard of Birkenhead, who is reading his play A Dream of Wilfred Owen. The play considers and imagines several phases of the life of Wilfred Owen, one of the greatest voices from the First World War, whose poetry still endures today.

LightNight visitors can also download a FREE LightNight iPhone app to make their own customised tour of the events and activities. TicTocTourist is a FREE iPhone app for tourists, impromptu visitors and residents alike. TicTocTourist enables visitors to have the whole LightNight programme in the palm of their hand, select a detailed itinerary and plan the shortest possible route on a handy map.

LightNight 2014 is the fifth edition of this annual late night festival. Each year the audience and the programme grow, with many new arts organisations joining this one-night celebration of Liverpool’s arts and culture. New comers include Mercy, HIVE, Bring the Fire Project, The Friends of the Flyover, Liverpool Biennial, Alison Appleton Studio, The Kazimier, Pagoda Arts, Merseyside Polonia, Karate Union of Great Britain, 20 Stories High, West Everton Super Strings, Scottie Writers, Outpost, Duke Street Studios, Aurora Media, The Reader Organisation, Wanderpool, The Mixnots and many more.
The FREE programme is online at www.lightnightliverpool.co.uk or available from all participating venues.

the Bluecoat: To Hell with Culture: A film by Huw Wahl