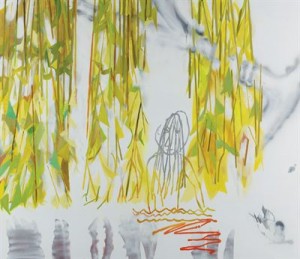 There is not long left to catch some of the UK’s most exciting contemporary paintings in the John Moores Painting Prize at the Walker Art Gallery until 6 January 2013.

The exhibition of 62 works, chosen from more than 3,000 submissions, includes the £25,000 first prize winning painting, Stevie Smith and the Willow by Sarah Pickstone.

The beguiling figure in Pickstone’s work, engulfed by the drooping branches of a weeping willow tree and delicate reflections in the water, is inspired by the poet Stevie Smith’s illustration for her 1957 poem, Not Waving but Drowning.

Judge Fiona Banner described the painting: “It’s a representation of the poet Stevie Smith in a deranged landscape. It’s also a painting of one artist reflected through another, a meeting of literary and pictorial minds – an enigmatic double portrait that grapples with the creative self.”

The four other prize winners included in the exhibition are: The Greater Light by Biggs & Collings, M is many by Ian Law, Gallery by Stephen Nicholas and Untitled Kerbstone Painting (MJK) by Narbi Price. Each prize winner received £2,500.

A special judges’ commendation was given to Wayne Clough for his work, Down the Acapulco.

The UK’s biggest painting prize which opened as part of the Liverpool Biennial, is an eclectic collection. There are paintings on walls and the floor, painted garments, varying degrees of abstraction and works that respond to all kinds of themes.

Andrew Cranston      Thinking inside the box

Nathan Eastwood     A Man after Ilya Repin’s Own Heart

Dougal McKenzie     Otl’s Gift (The Honeymoon of the Mechanical Bride)

Matt Welch                 Painting of IKEA shelf brackets arranged in such a way as to signify towards IKEA founder Ingvar Kamprad’s involvement with Nazism and Swedish Nationalism, distracted by varying levels of perspectival depth, variations in colour and visually dominated by some form of unknown dark oval in the background

New Brighton Revisited through the lens of three of its most...

The Re-development of the Bluecoat – Talk at Renew