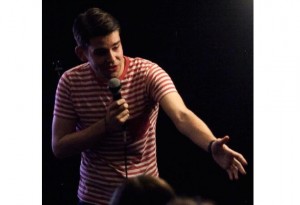 (Monthly, Every second Wednesday of the month)

Matchbox Comedy Club is a brand new, carefully curated showcase of alternative comedy featuring everything from sketch and stand up to clown and storytelling – a collection of new material and work-in-progress sets. Resident compere Alastair Clark introduces acts you won’t see anywhere else in Liverpool in an original, vibrant, anything goes evening of fun and frolics – a little matchbox full of joy.

Matchbox Comedy Club is produced by THAT Comedy Productions and Alastair Clark. Hosted by Lantern Theatre Liverpool Matchbox Comedy is setting the stage ablaze with an eclectic mix of comedy. The comedy night will happen monthly on the 2nd Wednesday of each month.

The opening line up includes:

Liam Bolton – Blurring the line between stand up and sketch, Liam Bolton is a bizarre and hilarious whirlwind of ideas, jokes and foolery. Inventive and playful, Bolton is a true original.

Sam Freeman – Liverpool based Sam lies somewhere between stand up and storytelling. Theatrical and thoughtful, engaging and funny tales of life and love told through multi-layered immersive performance.

Tom King, surreal, but cleverly constructed stand up. Gag-heavy whimsy from one of the biggest beards in comedy.

And last but by no means least Becky Webb, one half of physical theatre duo Jilted Pig, who unite comedy, improvisation, storytelling and circus.