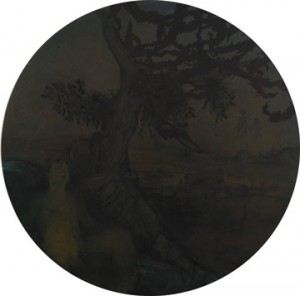 Metatopia was one of four other prizewinners in 2010. It goes on display next to the 2010 winner, Spectrum Jesus by Keith Coventry and joins the gallery’s outstanding collection of contemporary art.

The painting forms part of a unique display which traces the last 55 years of the John Moores Painting Prize, and in doing so represents the shifts and trends of over half a century of British painting.

Metatopia is a fascinating and enigmatic work. Layers of mirror-like polish obscure the imagery below, drawing the viewer in closer. The painting appears decorative at first, drawing upon Victorian visual culture to suggest love and romance. However further inspection also reveals forbidden pleasures, secrecy and taboo.

Nick Fox said: “The Walker ArtGallery is one of the most important cultural institutions in this country housing a world class art collection which was an inspiration to me when I was studying Fine Art in Liverpool.

“The John Moores Painting Prize and the Walker’s permanent contemporary works mediate and anchor its outstanding historic collection. It’s essential that this heritage of conversation between old and new continues to provoke debate, offer critical relevance and nourish contemporary culture, particularly in light of restrictive cuts to funding across the arts sector.

“I’m delighted that Metatopia will be joining the Walker’s illuminating contemporary collection and honoured that it will be hung alongside John Moores champions of painting past and present.”

Sandra Penketh, Director of Art Galleries said: “We are hugely grateful to Nick Fox, whose beautiful and intriguing painting is a fabulous addition to the Walker ArtGallery’s collection. Nick’s connection to Liverpool and the Walker go back to the early 90s when he studied at John MooresUniversity. It is wonderful to see this connection come full circle, as a John Moores prize winner in 2010 and with this generous gift.”

Nick is giving a free talk about his work in front of Metatopiaon 4 May at 1pm.

John Moores Painting Prize 2012 opens at the Walker ArtGallery on 15 September to 6 January 2013. A catalogue accompanies the exhibition.

For more information on the prize and to see behind the scenes footage go to: www.liverpoolmuseums.org.uk/johnmoores