Portrait and a Dream (1953) is a haunting and unfamiliar end to Tate Liverpool’s new Jackson Pollock: Blind Spots (until 18 October). The canvas is split; half a monochrome swirling scribble, with bold black stretches interspersed with staccato scratchy scrawls, and half a face, staring out amidst sweeping black arcs and orange and red highlights. Suggested to be the last great work of the abstract expressionist, Portrait and a Dream is the culmination of the ‘Black Pourings’ that this exhibition surveys. It is a virtuoso finale. 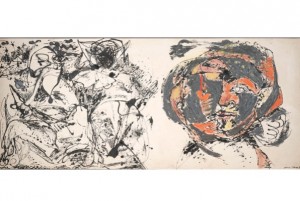 The exhibition starts in more familiar territory. Works such as Summertime: Number 9A orient the show’s narrative as beginning in the heady heights of Pollock’s fame. Blue and yellow accents pepper the swirling canvases, sliced through by red gashes. Black splashes appear as stick figures, dancing and bopping around the canvas, hands in the air. These ‘Drip Paintings’ capture Pollock’s revolutionary process of flicking and splashing paint onto a raw canvas, lain on the floor. This is the Pollock that is burnt onto the retinas of twentieth century art.

The curators (Gavin Delahunty and Stephanie Straine), however, are keen not to let visitors get into this groove for too long. Quickly, the exhibition sweeps them towards Pollock’s ‘Black Pourings’ of the 1950s. Not one to linger in the face of widespread critical acclaim, Pollock began to pour, smear and spread thick black enamel and oil paint onto the canvas using a turkey baster. The results are dense forests of forms. Hints of mysterious figures, human or otherwise, peep through the thicket and lurk in the shadows. These dark images are haunting and evocative of the intensity and depth of Pollock’s personal struggles, not least with insurmountable alcoholism.

The explanatory wall texts largely concern the underwhelming critical reception and confusion that met these works. The invitation to the first exhibition of the ‘Black Pourings’ at Betty Parsons Gallery in 1952 is displayed; an exhibition at which the paintings went nearly completely unsold and forced Pollock to change representation. Implicit in the telling of this story is the suggestion that the contemporary audience recognises these later works as every bit as masterly as his ‘Drip Paintings’, and in the face of Portrait and a Dream, it is hard to disagree.

The exhibition marks the most significant showing of this series of work for over thirty years. It is perhaps unavoidable, therefore, that the feeling of the exhibition is chiefly academic. It is an essay in which Pollock’s works are references. The conclusion it reaches, a celebration of these later works, is well-founded and justified, but often the exhibition veers towards the prescriptive. For works so full of subtly and vitality, the curatorial agenda risks being heavy handed, the presentation a little static. Had they been presented on a predominantly aesthetic plane, rather than interpreted through their earlier ‘failings’, the works would have spoken eloquently for themselves. It is informative to compare the exhibition which, though interesting, runs a bit dry, to another presentation of Pollock’s work. 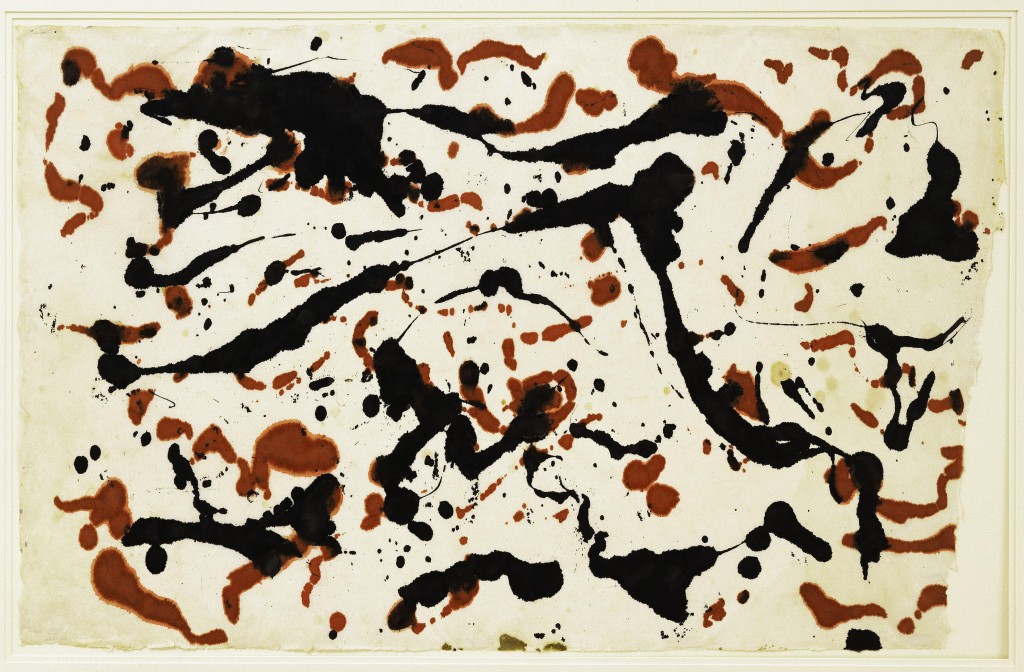 In 2014, the Complesso di San Firenze (Florence) hosted a small companion exhibit to the affiliated Jackson Pollock: The Figure of Fury (Palazzo Vecchio, 15 April- 27 July 2014). The Complesso lacked a single speck of paint flung from the American Abstract Expressionist’s brush (or stick). Instead, the visitor was plunged into a storm of forms, light projections raining and splashing down in an inescapable torrent of colour. Elsewhere, Namuth’s famous film of the artist vigorously splattering a sheet of glass with paint, was shown on the ceiling. The viewer was forced to experience first-hand the onslaught to which Pollock subjected his canvases.

The exhibition was a masterstroke, a remarkable expression of the rhythm, movement and action contained in Pollock’s canvases. With simple low-fi technology and courageous curating, the show plunged the viewer deep into Pollock’s practice and invited them to splash around. It captured his works’ feeling of being fit to burst like so much silly spray. Blinking back into the Florentine sun, the overwhelming feeling was one too rarely experienced within the walls of a gallery – ‘that was fun’.

This small exhibition didn’t intend to make any grand points. Rather, the point was to offer the viewer a real affinity with Pollock’s process; action and movement are, after all, central to his work. While this show did rather concentrate on his earlier style, the experience of the Complesso’s exhibition allowed for a sympathy with Pollock’s work that informs an engagement with his entire oeuvre. The immediacy of the show was much more ‘Pollock’ than Tate’s ambling academicism.

Jackson Pollock: Blind Spots certainly enriches and broadens the understanding and perception of the artists’ trajectory; it just makes points a little too zealously. The works benefit from being gathered together so thoroughly, but suffer from being used as vessels for a curatorial objective. While as a display it is static and uninspired, what it displays is full of movement and intrigue. Perhaps it is best to ditch the guide, and foray into the unchartered forest of the ‘Black Pourings’ alone.