I first met David when he was submitting his marine paintings at the Mall Galleries in London, where I worked at the time. With a fascinating international lifestyle and a successful painting career, I decided to find out how painting has led Liverpool artist David Rees around the world and back again.

David spent his childhood years in the Wirral, and as an art student in Liverpool. He then emigrated to Australia, in his 20’s where he started and owned his own Advertising Agency, writing and producing TV and radio commercials, and later, consulting to international clients in Dubai. Becoming a painter was always David’s childhood dream, so after starting his first series of works on the theme of ‘Reflections’, David decided to paint full time, and return home to concentrate on his artistic career. 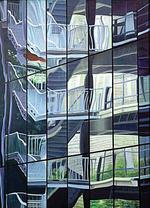 Kaye: So what first inspired you to ‘give it all up’ and become an artist?

David: ‘I’ve always been the artist, from the time a pencil was first put in my hand. Looking out of my apartment in Dubai one day, my attention was caught by a reflection in a window. There were lots of buildings and skyscrapers around with reflective glass, and I became fascinated by the abstract distortions and patterns that you can so easily walk past without noticing. Translating my observations onto canvas led to a whole series of paintings on this theme, and over the next two years, my second bathroom was converted into a studio – my easel was set up in the shower cubicle, and my paint palette lived on the toilet. But the light was good in there!’

Kaye: So how did returning to Liverpool develop your painting career?

David: ‘Well I was born in Liverpool and grew up with the Beatle generation, and after spending many years living abroad, it was really a sense of nostalgia which brought me back. Childhood memories of the Mersey and the ‘hay days’ of Liverpool have always stayed with me, and spending time observing the boats and docks where I grew up provided the perfect subject matter for a new series of work. I have always regarded myself as a Photo-Realist painter, and going back to the basics of observational study also provided an opportunity to develop my painting technique’.

Kaye: Most recently, you have started painting portraits, with one or two very famous subjects. How did this come about? 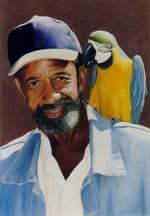 David: ‘It all started when I was invited to exhibit in the Virgin Islands. While I was there, I spent some time getting to know some of the local characters, who asked me to paint their portraits. This led to a series of studies and commissions, and a new outlet through which I could further challenge my painting skills. When I returned home, Cherie Booth QC agreed to my painting her portrait – (which I gave to her, and which now hangs at No. 10) and I have subsequently completed 2 further portraits of her.

Kaye: You have enjoyed great success with your paintings on a fairly international scale – so what’s your secret?

David: ‘I have always wanted to become the pure artist I felt destined to be, and being successful takes a lot of dedication and commitment – you have to be completely focused on the dream to make it a reality. Having a good agent always helps, and my sister Diane has been a great supporter and promoter of my work in this capacity’.

Kaye: So now you’ve acquired three strings to your bow, do you have any plans to get involved with any local projects in the run up to Capital of Culture 2008?

David: ‘Of course, I’d like to be involved and be apart of the Capital of Culture year – In my marine art – stirring the nostalgic days when the Port of Liverpool was host to the world’s finest liners and the busy river bustled with every kind of ship imaginable. Liverpool’s skyline is altering and changing and I’d like to spend time ‘casting my reflective dimension eye’ over this famous skyline to perhaps discover and project new images – from newly created angles. Liverpool has always had at its heart its many ‘old wags’ – I’d like to try to capture and reflect the unique ingredient of ‘Liverpudlian character and humour’ within the faces of its people.’

David’s ‘Reflection Series’ have been exhibited in the Caribbean, Australia, New Zealand, Dubai and London. He has also exhibited with the Royal Society of Marine Artists and the Australian High Commission in London, and his work features in several private collections – including the PM’s!