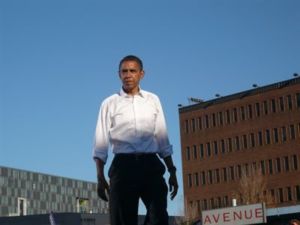 As Obama faces a second term as president of the USA, the first European display of a series of stunning silkscreen prints, which tell the inspiring story of his 2008 presidential campaign, opens at the Walker Art Gallery.

In Seven Days…, a study by the artist Nicola Green of this historic event, which saw the election of the USA’s first Black president, goes on display from 18 January, in time for Obama’s second public inauguration, on 21 January (Martin Luther King Day). The exhibition runs until 14 April 2013.

The seven images have a formal order: Light is the first in the series and represents the beginning of the story; Struggle is the history of the campaign; Hope the characters involved; Change the main protagonist; Fear conveys the obstacles encountered; Sacrifice/Embrace an ambiguous resolution, and Peace a conclusive hope for the future.

Get On (card)Board for Castle Creations

David Jacques and Stewart Home talk on Art and Rebellion