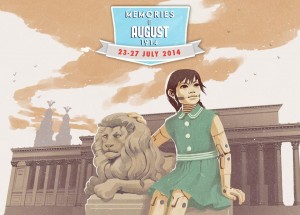 Royal de Luxe returns to Liverpool for a five-day spectacular launching at St George’s Hall on 23 July and proceeding through the city’s streets in a promenade theatre adventure.

This year, as part of the First World War centenary commemorations, Giant Spectacular introduces a new character; The Grandmother of Liverpool, a new 24ft tall Giant able to speak, will spend Wednesday and Thursday asleep in St George’s Great Hall, with visitors invited in to see her at close hand.

On Friday 25 July, the Grandmother, along with the Little Girl Giant and her pet dog Xolo from the 2012 Sea Odyssey street performance, will embark on a three-day journey throughout the city centre based around the true tales of the volunteers who signed up for the Liverpool ‘Pals’ at the outbreak of World War I in August 1914.

For a live feed of GIANT updates visit Liverpool Echo

For more information and to download a map of the route the characters will be taking, click here