Tunstall Street is one of a number of streets in Wavertree which was designated for demolition as part of Liverpool City Council’s housing strategy to demolish old properties to make way for new builds.

The project was part of the Housing Market Renewal Initiative which ran from 2002 to 2011, when funding and the authority to demolish was ended by the incoming coalition government. Over the course of that period, communities were dispersed, and areas run down. In 2014 Liverpool City Council initiated a scheme offering houses for sale for £1, as long as they were brought up to a living standard and lived in for five years by the buyers.

Over the course of the last five years, Ali Harwood has made artwork in response to the street. Two works, #Tunstall30 and Kids That Fly are presented as part of the Independents Biennial.

#Tunstall30 isn’t a new piece, it’s an ongoing interaction with the site isn’t it?

I started because I live quite close to the road, and in 2014 I began responding to the buildings because they were pretty much derelict then. The idea was to spend some time with each house and respond to that house with some kind of respect and just let it talk to me.

So, it was a kind of time-based piece where I would sit opposite the house. I took photos of each house, one by one, as I walked up the street and then I wrote a haiku for each house.

That was in 2014. In 2015, as well as doing haikus and taking photos of each house, one by one, I did what I referred to as an ‘artiku’ – like a haiku but with lines. It was five lines, then seven lines, then five lines in the same way you would use five, seven five, syllables for a haiku. I did those in different biro colours, then went home and worked them up into paintings.

In 2016 they put the blue boards up, so I had an issue with that, thinking ‘how am I going to respond?’ On the face of it they looked quite similar, but they weren’t. I took photographs, one straight on, one down on the floor at ninety degrees, then one up at the sky. So, it is a very contemplative way of doing it with those thirty houses. Then, I also wrote the haikus for them for 2016.

For 2017, I did what I refer to as my ‘twentythreeku’ which is to do with the burgeoning Liverpool Arts Lab, the number twenty-three, and the fact that the number 23 is mathematically a happy number as well as a prime number. Therefore, I went on a walk around Liverpool looking for things that could be described as things that make me happy.

So I did that, took photos and worked them up as images, and then I fly posted those up on the boards of the #Tunstall30. When I came back from pasting those up, that’s when I came across the kids who were playing and who became Kids That Fly.

This year, with each of the years that I’ve done so far, I’ve chronologically pasted those up on the houses, not directly on each actual house, but I did it every fourth panel, so that each panel represents a year. So, each time, I’ve fly posted them at different times of the day. I did the 2014 ones first, then 2015, then 2016. It’s interesting to see how people are responding to them. When I’m pasting them up, different people react in different ways. Mostly through ignoring me completely, but it’s a really interesting corridor between Earle Road and Smithdown Road.

When it was just the 2014 ones up, after a few days, someone had gone with their key and down eight of the posters in the middle, but the end ones are alright. To me that’s fine, because I’ve put something up there and people have responded to it. I’ve also seen people going and having a look at the work. I’ve also had conversations. It’s interesting when you look at the responses to other similar art in terms of how it’s manifested itself in the (Liverpool) Biennial.

Do you think your work has been responded to differently because it relates to the area and the houses?

You can see that my response is actual photos of the houses, so it shows that actually, it’s about the area, although some of them are a bit more abstract. If you put art in public, you are going to get a response and the dialogue is really important. If someone wants to put something up someone might want to respond to it.

What I’ve posted up, it’s an interesting take on what is an artist, what does an artist do, how do they respond. I like to do it form a personal perspective to try and interact with each person that I meet as much as possible. That’s what informs my work; it’s not overtly political. For me and for where I am at the moment, the personal is more powerful that the overtly political.

I think I’m quite curious, I’m interested in people and ideas and I will respond in the most appropriate way to what’s around me.

What was the impetus to respond to this particular street?

I live near there. I’ve lived around that particular location for over ten years, so its home, so it’s me having a dialogue with my surroundings. For example, the school that’s being built, that wasn’t there when I moved in.  I’m interested in terms of how our environment, changes, how it shapes us. It’s actually a very theatrical space if you go down there. You can watch someone walk from one end of the road to the other end of the road and its absolutely fascinating, whether they walk, whether they’re cycling, whether they’re driving, whether they’ve got a pram, what have you.

How does text integrate into your art?

Over the last few years, I’ve struggled with how to categorise myself. Words are really important to me, so I’ve come up with ‘artist, poet, writer, teacher’. It’s increasingly in that order and they overlap. I’ve always drawn and always written. I write stories as a teacher, I write, and I draw, and I paint. So, I see them all as part of one thing really.

Kids that Fly – that came out of the #Tunstall30 project?

I was fly posting up my ‘twentythreeku’ thing and I parked my car around the corner. When I came back to my car, there were these kids in a quite a dilapidated area with rundown houses. They had found an old mattress that they had put on the street and they were basically doing summersaults and flips and so on, onto the mattress. In this quite drab place, I was really impressed that they were challenging themselves. It was verging on dangerous, but they had the mattress there. It looked amazing and they weren’t bothering anyone.

They had come up with their own thing to do and I just thought that’s brill. I asked the young people do you mind if I take some photographs? I said I would come back and put them up on the street where they were doing it. They said it was ok. I took some photographs and cropped them a little bit and for each image I wanted to choose an inspirational word. They (the t-shirts) have got things like ‘pioneer’ and ‘adrenalise’. I was listening to what the photograph was saying to me.

I had also done a painting called Wavertree Buddha. It was my response to the looting that happened in Liverpool a few years ago. On the initial posters, I overlaid the photos on my Wavertree Buddha. I printed them out, twenty-three of them and I did an alfresco triptych. I fly posted the twenty-three posters – five, seven and eleven.

My initial thought (to the exhibition space in St John’s) was that I would print them out and put them up in some way. I spent a considerable amount of time walking around St Johns and I noticed that there are lots of garments for sale. I thought the most appropriate way of showing Kids That Fly here was to print them onto t-shirts and hang them on the branches of the trees. I wanted people to be curious and look at these kids that are doing something really powerful and to look at the words and to think. I put arrows so that they are pointing up to the sky, up to where we want to aim, somewhere beyond where we are already, somewhere better. A lot of what I’ve done is intentional, trying to respond as honestly as what I can to what I’ve experienced.

How important is it to exhibit in St John’s market?

I think it’s important, but I also think it’s important for the artist to respect the space in which they’re given and to have that discussion with the other people with whom their artwork shares the space. I’ve put up my artwork and I’m not around all the time. The people who own the stores are here all the time so hopefully they don’t think it jars with what is going on in the space and it compliments it, but it is different. It would be nice perhaps to do things here in the future as well. I’ve just had some really good interactions with people. 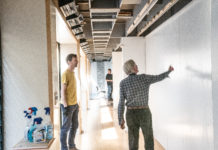 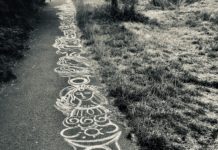 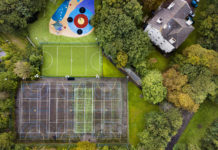 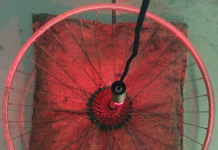 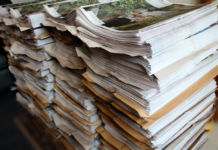