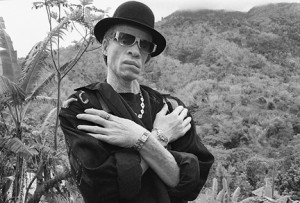 Bob Marley once spoke of a prophecy, which said there is one music that will unite the people. Well, this is it.

Reggae legends Yellowman and Dillinger took to the stage at District, in front of a bustling and excited audience last week, in the run up to this year’s Africa Oyé Festival.

It was clear as the reggae royalty took to the stage, that this was what Bob was talking about: reggae has the power to make people happy, to make them dance, and to unite the old and young over the love of the sunshine music. The incredible Dillinger was the first act, and the crowd screamed and cheered for the 60 year old performer throughout his entire set. Eccentric, lively and most of all talented, Dillinger rocked District from the moment he took up the mic. This is an artist who has been performing his music for over 40 years, and still has the energy, vitality and ambition to capture new fans and inspire new audiences with his incredible sound. Playing a selection if his hits and his own most favourite tracks, this first set was a real crowd pleaser. With massive tunes such as Cocaine in my Brain and Natty Dread A The Ruler, Dillinger begged the total admiration and respect of the crowd.

The top-billed act of the night, however, was the infamous Yellowman, whose rise to reggae fame has at time been a struggle. Brought up in an orphanage, Yellowman is an albino, and has suffered jaw cancer, for which he had to undergo extensive surgery and almost lost his life. But it seems that every hurdle has made him stronger, and his performance at District was a tribute to this: bouncing onto the stage in full military gear, Yellowman launched into a set packed with his most memorable songs, and was called back for not one, but 2 encores. Introduced as “King Yellowman”, reggae royalty reigned supreme tonight, as his charisma and humour on stage, interacting and dancing with the audience coupled with his powerful lyrics swept the whole place up into a reggae fever. A truly masterful set, with songs such as Blueberry Hill and Soldier Take Over left the audience astonished at the sheer energy and determination this performer portrays on stage, with a voice stronger and grittier than ever before in his career.

A special mention should also be made about the Sagittarius band who accompanied both performers, and kept the music going, literally without a pause, for the entire night! These 3 veterans of reggae boast a wealth of talent, and really brought the Jamaican sun to the chilly Liverpool night.

Meanwhile, outside the venue (which is actually the old Picket down on Jordan Street) we found a Jamaican inspired food truck, serving up caribbean cuisine to the night’s hungry revellers, which I found an inspired idea, especially with the party carrying on late into the night, with DJs and more music until the early hours.

A perfect night of incredible music, inspiring performers and a true feeling of unity, we felt one with reggae tonight.

Fancy more reggae this season? Lee Scratch Perry is playing at The Kazimier this week, and it promises to be a great night!

Yellowman and Dillinger performed at District on 1 March 2014