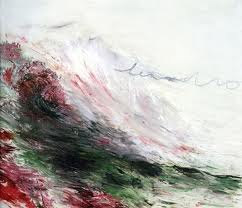 In 2007, an artist named Rindy Sam was convicted of ‘voluntary degradation of a work of art’ for kissing a Twombly painting at an exhibition in Avignon, France, and smudging the canvas with lipstick.  In her defence, Sam described her action saying “It was just a kiss, a loving gesture.  I kissed it without thinking; I thought the artist would understand…It was an artistic act provoked by the power of Art”.  I was reminded of this incident when I recently visited the inspired exhibition at Tate Liverpool that includes the later works of Turner, Monet and  Twombly.  Already a great admirer of the two former artists, I have to admit that Twombly was a bit of a mystery to me.  Ah, and what a joyous mystery he remains!  His large white canvases contain dramatic splodges of paint that somehow speak of deep emotions and envelop the senses while the, often indecipherable, scribbles that race across the surface taunt you as you desperately try to untangle their meaning.

Twombly died in 2011 at the age of 83, and these paintings from the last thirty years of his life create an impression of melancholy, love, and the passage of time while simultaneously revealing a level of energy and determination in the artist that is inspiring to observe.  Twombly described himself as a ‘Romantic symbolist’ and this is evident throughout the exhibition as classical and literary references abound.  The moment you step into the gallery you are met with Hero and Leandro (1981-84) a painting in four pieces.  The Greek myth tells of how Leander would swim to his lover, Hero, every night until one night he was lost in a storm; in her despair Hero threw herself from her tower into the waters below.  The lush reds and greens mixed with black of the first painting in the series unite in their confusion to form a great tsunami that explodes to sweep you away towards the scrawled name of the doomed lover.  As you move on, you feel as though you are in the midst of the crashing wave and you are pulled under the surface of the sea; the vivid colours are gone, replaced by pinks, greys and greens scarred by deep and violent scratches while a dark puddle of black paint sinks to the bottom of the canvas.  In the stillness of the third painting, the sea has closed over to form a watery white grave with echoes of colour.  I was reminded of the calm of Monet’s magnificent Nympheas, which awaits on the next floor of the exhibition.  The partly erased words scrawled across the fourth, and final, lightly painted off-white canvas make reference to the poem about the tragic couple written by the English poet, John Keats, and invoke a sense of loss.  The presence of movement and colour, the force of emotion, has vanished and the viewer is left exhausted and yet filled with a feeling of tranquillity.

The writer and artist John Berger once described Twombly as ‘the painterly master of verbal silence’, and as you view the two versions of Petals of Fire (1989) you begin to understand what he meant.  To paraphrase Berger, Twombly fills the silent spaces that exist between and around words in a visual display, in this case of deeply textured blood red petals as they fall through the air.  The simplicity of the cream background and the snatches of sentences interspersed with dripping deep red petals is beautiful and full of sadness.  On closer inspection, you can detect the sensitive touch and layered texture of the petals as they make their descent down through the canvas. The catalogue states that the inspiration for these paintings originated from a phrase contained in Oscar Wilde’s The Picture of Dorian Grey – ‘the huge sunlight flamed like a monstrous dahlia with petals of yellow fire’ – but for me the Petals of Fire reminds me of a novel of the same name written by World War Two bomber pilot, Herb Alf, and based on his experiences during the war.  I have always found his description of the bombs that were dropped over Europe (Petals of Fire) as achingly poignant, and while contemplating Twombly’s canvases I realised that I had stumbled upon an expression of the title in visual art.

Perhaps most beautiful of all are the Quattro Stagioni (Four Seasons, 1993-95), which manage to be both mournful and exhilarating.  Twombly famously used his hands and fingers when he painted and you can imagine him, hands drenched in paint, as he worked with ardour on the canvases to create images that are so physical;  full of texture, smears, blobs, dripping paint, and scribble, they are intense and raw.  The luscious decay of autumn, the darkness and blinding light of winter, the vibrancy of spring all give way to the melting heat of summer.  Standing surrounded by these four vast paintings, you are immersed in a moving illustration not just of nature’s cycle but of the passage of human life depicted in sumptuous colours and a form of graffiti that is brimming with emotion.  The New York Times obituary for Twombly mentions an interview in which he described the process of painting as close to having ‘an experience’ and how after completing a picture in a kind of ecstatic state he would have to rest in bed for a couple of days.  Scrunch up your eyes and  you almost fancy that you can see him sleeping soundly at the foot of this breath-taking series.

In need of some time to absorb all that I had seen, I sat in the Tate Café over a milky coffee and, returning to the story of Rindy Sam, I reflected on whether Twombly’s art had the power to make me forget myself, lean in towards it and kiss it? You bet it did!