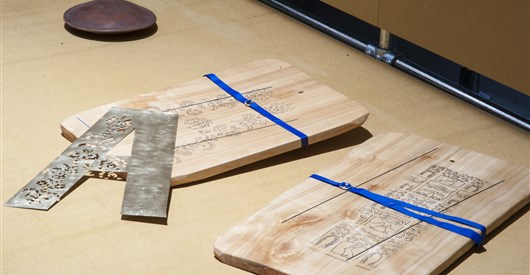 Right now, FACT is Liverpool’s gathering spot for different clans of makers who associate themselves with DIY be it through crafts or creative technology. With a reputation as the UK’s leading media arts centre, FACT has taken a bold and most definitely a brave move to host an exhibition on ‘making’.

Exhibitions like this are a funny one. This one is like an archive of artworks that are outside of the gallery; the exhibition is somewhat static but the artworks are alive in the city. Museums and galleries are known for being places where you can look at things to learn, and the thing that makes FACT special is the fact (pun intended) that it allows its audiences to interact with the displays because doing is also a form of learning. The displays are more like doorways into activities and learning experiences that you can partake in through FACTLab and the exhibition’s own public programme. That is what Build Your Own: Tools for Sharing is about. It’s an exhibition of the activities that are on offer – new skills to acquire with the potential to convert into something useful. As FACT’s director Mike Stubbs boldly expressed, “we don’t want people to just gork at art” when they are in the gallery.

All of the displays have three key elements in them; the act of sharing in a community, a traditional knowledge and a modern approach. These makers who associate themselves with DIY have all strongly expressed their love for hacking too. Understanding the use of tools paired with how they can be manipulated to suit specific needs, in addition to the act of sharing this knowledge, are some key elements that craft shares with technology.

Linda Brothwell’s Acts of Care involves making bespoke tools to create artwork. Tools are essential for producing work, but what if you hack the tools so that they become pieces of art in their own right? Acts of Care in Liverpool combines traditional Polish paper cutting skills with Liverpool’s seafaring, history to produce The Lost Letters of Liverpool. Engaging with different stories in the city has allowed Brothwell to create a new set of artworks as well as tools that act as a working template for others to use. The artist taps into the traditional skills and heritage of all the sites which she works in, and the ongoing project includes publicly-installed pieces integrated in cities all over the UK. The Lost Letters of Liverpool can be spotted on iconic buildings around the city as the filler for the missing letters on the façade of these buildings. Perhaps a treasure hunt can be made out of this? Maybe we can make a game out of spotting Brothwell’s letters appearing around Liverpool?

Craft is seen as traditional and technology as modern. Even so, these two practices are more alike than they are different. After all, the roots of both craft and technology can be traced to the act of doing something achieved through self-directed learning. Craft is defined as an activity which involves skills in the making of things by hand. Technology on the other hand is defined as the application of scientific knowledge for practical purposes, yet both practices require competence to be able to create something.

Connecting tools with products and their users is a shared aim for both craft and technology. Using 3D printing technology, DesktopProsthetics by DoESLiverpool is a production line that invites volunteers to help print and assemble the Raptor Hand, a 3D printed design produced to act as a temporary prosthetic device by local children with upper limb deficiency. This is part of a larger movement which aims to highlight the practical uses of 3D printing and how challenges can be easily overcome when different communities share skills and specialised knowledge.

Technology is commonly perceived as cold and dead. It has a systematic way of working, one which actually reflects the ordered mechanism of nature. In a way, Rachel Rayns’ work is challenging the gap that we have built between nature and technology’s processes. Her robotic gardening system at FACT is the mother machine of Neurotic Machines, monitoring plants’ light levels, temperature, humidity and feeding. The artist is also interested in and wants to promote intergenerational learning, believing that we learn more when we interact with people from different stages in life.

Putting this into action, the Raspberry Pi Foundation has donated 100 gardening robot kits as part of the Robot Greenhouse workshop series. The robot uses a Raspberry Pi, which is a low-cost computer the size of a credit card that can be used to programme your own ideas. The Robot Greenhouse workshop that took place on June 28 was incredibly insightful, with Rachel Rayns and her helpful assistants demonstrating to the intergenerational teams of adult and child combination that computer programming can be simple. A word of warning though; the child in your intergenerational combo is very likely to be the more informed person when it comes to the field of technology! Be prepared to display the patience of a saint when working with teenagers striving to prove to you that they know what they’re doing – which is a proclamation many are more than entitled to claim. Adults, step back and take in what your little ones have to show you! Then maybe step back in when they need help with keeping the plants alive…

Craft allows us to build our own world; Homework by Will Shannon and Assemble is a great example of this. The project is a collaboration that proposes our living spaces should have a second function as places for productivity through learning and experimentation. On display at FACT are four examples of how domestic machines and their products can be imbedded in our houses.

The Yard Factory in Gallery 1, which Shannon and Assemble originally constructed in the backyard of a house in association with The Granby Four Streets CLT, was created to cast unique concrete mantlepieces for houses on Cairns Street. Combining the act of learning a traditional process, with experimentation, the mantlepieces produced through the collaboration used reclaimed materials to refurbish dilapidated homes. This concept seems flawless but in reality, the resources needed to implement this ideology more broadly could be problematic. It’s the chicken or the egg situation; do we invest in making so that from the very beginning we can build our own bespoke world, or do we settle for the ready-mades first, until we can be comfortable enough to push for something special? As Shannon and Assemble have shown through their work, the power of community allows us to achieve more when we come together.

As expected, Build Your Own: Tools for Sharing is an exhibition that embodies new ideas, exciting ways of working and public participation. The concept of this show is everything that FACT is building its positive reputation towards. The displays may be somewhat static but they are doorways for us to learn new things; the exhibition encourages its visitors to make and FACTLab on the first floor is there to facilitate this. It currently houses a workshop for FACT’s artists in residence and a futuristic yet nostalgic looking classroom for public activities. There are many programmes on offer for people of all ages and abilities to join in. What are we waiting for? Let’s start making!

Build Your Own and FACTLab are on display at FACT until 31 August.