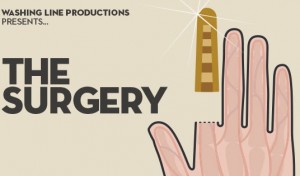 Last Sunday I waved goodbye to the sunshine to step inside The Surgery; a fictional practice within the bowels of the Kazimier, brainchild of writer and director Jennifer Moule and co-writer Alexa Morton.

Described as “a dark farce, which knifes the culture of the nipped, tucked, plucked uber-wealthy who flash the cash” The Surgery delivers on comedy, wit and a dash of good old fashioned silliness.

Exploring unsettling themes about identity and the pressure placed on women to look perfect, Moule and Morton have created a play which challenges the audience physically as we are stripped of our inhibitions and plunged into a living world of eccentrics and a possibly sociopathic plastic surgeon.

I have always enjoyed ‘promenade’ theatre, and this one is no exception: splitting the audience in two upon arrival (into Os and Xs) each group was led by a different performer to explore one element of the story. The group I was in were taken on a walking tour by the fabulously eccentric ‘fashionista and disc jokey’ Giorgio (Giulio Carini) around the Kazimier Garden and back to the Wolstenholme Square entrance, by which point we have encountered many “future clients” for Dr Angapalapagos along the way.

Back inside the venue, we next met another of the Doctor’s employees; an energetic, enigmatic ‘gold digger’ (Kurtis O’Kasi) who educated us on the value of the doctor’s latest procedure aa well as sharing a rendition of one of his own songs.

Dr. Angapalapagos himself, played by Andrew Gruen with an American accent was over the top, arrogant and unsympathetic (and very good at portraying all of the above too!) My favourite character though was his secretary and assistant Angela (Georgina Jones), who despite his continued insults and harassments, clearly doted on the vile doctor eliciting many laughs from the audience throughout the show. Another standout performance came from the surgery’s top client, an It-girl (Jennifer Moule) whose addiction to achieving physical perfection and hilariously boundless need for attention topped off a strangely well-placed musical number about the operation procedure involving the whole cast.

After meeting the somewhat sociopathic doctor, and witnessing “live” surgery in action, we were prompted to book a private consultation with Dr Angapalapagos and sign up to receive our very own gold finger; unsurprisingly there were no takers.

Find out more about Washing Line Productions at jlmoule.wordpress.com

Art in Liverpool at ANDFair 2013