Words and photographs by Stephen McKay

My partner and I first trekked down from Liverpool to London for the Vauxhall Art Car Boot Fair (VACBF) in June 2007 after we read that our favourite contemporary artist Tracey Emin would be selling artworks for pocket money prices.  Tracey didn’t turn up that year but after buying limited edition prints directly from Sir Peter Blake for only £25, bumping into Uri Geller, chatting to Zandra Rhodes and being entertained by a variety of bands and burlesque performers, all for an entry fee of less than a fiver, we were hooked and have been making the annual pilgrimage to Brick Lane ever since. So when it was announced that Liverpool would be hosting the first of two regional VACBFs I was eager to find out how the Northern version would compare with the original. 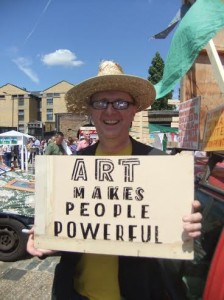 The Art Car Boot was the brainchild of event managers, sisters Karen Ashton and Helen Hayward.  After a pilot event in Brighton in 2003 to prove their concept, Aston and Hayward gained sponsorship from Vauxhall Motors to produce the first Vauxhall Art Car Boot Fair in the old Truman Brewery’s Brick Lane Yard in 2004. Initially planned as a bi-annual event, the ‘Art Car Boot’ proved so popular it became an annual event from 2006 and has attracted internationally known artists such as Sarah Lucas, Tracey Emin, Gavin Turk, Sir Peter Blake, Bob and Roberta Smith and Billy Childish as stall holders.

Rather than a car boot sale, the VACBF more closely resembles a traditional English Village Fate with an eclectic mix of performance, surreal games, traditional food and drink, and of course Art. The fair gives art collectors and the ‘Art-Curious’ the opportunity to pick up original artworks direct from artists for prices from £10 to £1,000.

Once the doors have opened you can pay the entrance fee to enjoy the stalls and entertainments at any time but if you want to grab the juiciest worms at the Brick Lane VACBF you have to be a very early bird; queuing is essential. Since 2011, when it was revealed that 75 exclusive Damien Hirst prints would be going to the first in line, overnight queuing has become the norm. Amongst this year’s Brick Lane bargains were limited edition prints by Sir Peter Blake (£60), Street Artists Pure Evil (From £40 to £400) and Ben Eine (£70).  When the doors opened at noon there were an estimated 2000 people in a line which snaked round London’s East End. The competition to grab the bargains is intense and strategic decisions have to be made regarding which stall should be the first to run to. The first 20 minutes are a fabulous frenzy but by 2pm things have usually settled down and visitors can relax and enjoy events which include the ever popular Handbag Disco, an exciting variation of musical chairs, with Celebrity DJs.

The Liverpool event in comparison was much more laid back, possibly due to the torrential rain on the Friday night before the event, which according to forecasts, threatened to continue through the weekend.

Determined to see how the day would shape up I arrived in Wolstenholme Square at 4.30 just as the rain was abating to find but two very damp Brick Lane regulars outside the shutters of the CCP Car Park.  One guy from Doncaster had arrived at 1am and was holding the soggy remains of a Peter Blake (PB), Sergeant Pepper’s poster. PB had pulled out of this and other Liverpool Biennial events at the last minute due to ill health. The news had come too late for the many people who continued to arrive clasping items for the ‘Godfather of Pop Art’ to sign.

The queue grew slowly throughout the morning as weary collectors who had travelled to Liverpool in the early hours or were recovering after enjoying Liverpool’s night life found their way to the square. However, the numbers were a fraction of those seen in London. To pass the time locals in the line gave the collectors from out of town impromptu tours of street art in the area, gave directions to the Bluecoat coffee shop (one way of supporting local art) and tips on where loos could be found, a priority if you are in a queue for over 6 hours.

The shutters of the CCP car park opened at 10am when vintage Vauxhall cars and artists started to arrive to set up their stalls. At 11.30am Karen Ashton came out to say hi and confirmed that 150 signed, Beatles prints specially created for the event by Peter Blake had arrived with the Car Boot Crew. There was increased excitement as numbered cloakroom tickets were carefully distributed to ensure that the position in the queue would correspond to the edition number of the print received.  Surprisingly there were tickets to spare so late arrivals still stood a chance of acquiring a Blake. 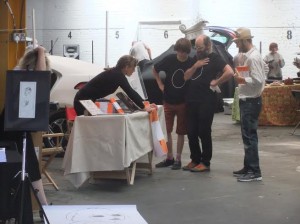 There was discontented murmurings in the ranks when the 12 o’clock start time came and went but once the stall holders finally confirmed they were ready, at 12:05 the £3 entrance fees were quickly paid, the familiar ACBF red stamp applied to the back of hands and the rush started towards to the VACBF stall where cloakroom tickets and £60 were exchanged for the PB prints. Once I had secured Print Number 3 my next stop was the Gavin Turk stall.

Gavin Turk (GT) is one of the VACBF’s keenest supporters. He has attended every fair and is determined that the sister events in Liverpool and Folkestone should be a success. Gavin is known for his theatrical approach as a stall holder. I first met him at the 2007 Brick Lane fair where he was dressed as a used car salesman selling signed car boot lids out of the back of a white van: £200 for a Mini, £2000 for a Mercedes. This year he was commissioned by Vauxhall Motors to transform an Ampera into a unique piece of art. GT’s done this by covering the car entirely in canvas and calling it “The Mummy”. I’d seen this canvas car when it was unveiled at Brick Lane and could not believe GT was going to drive it up to Liverpool as I’d been told, but when GT arrived at the CCP car park the canvas covering the headlamps, mirrors and windscreen had been removed to make it road legal. For his Liverpool stall Team GT had created an edition of 50 polystyrene cups, which GT had drank out of then driven over in the Mummy and signed. GT has history of using the humble disposable drinking vessel in artworks; he has previously produced painted bronze replicas and screen prints of Polystyrene cups. So in Liverpool, just for one day you could buy a limited edition signature work from a YBA for just £30 rather than the usual thousands of pounds, not that all the visitors to the fair appreciated the opportunity.

One artist whose work was proving more a accessible to the general public was another Brick Lane regular, graphic artist ‘Swifty’. Ian ‘Swify’ Swift studied art in Warrington but is now based in London’s East End and is known for his work for the music industry. Swifty produced two limited edition prints which quickly sold out: ‘My Team’ which features the LFC stars of the 1970s and ‘Operation Big Beat’, a gig poster for Swify’s dream Merseyside concert. 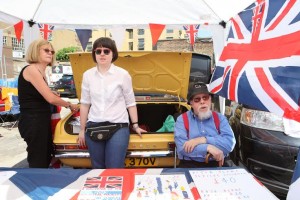 Considering the wet start to the day the venue soon warmed up when the sun came so we appreciated some very lemony home-made lemonade from Hunt and Darton’s pop-up cafe ‘where food and drink meets live art’.  We were fascinated by the monochrome fox heads wearing mink masks which were hanging in a row on the wall and enjoyed a long talk about the work with their creator Nina Saunders. There had been a whisper in the queue that Nina Mae Fowler’s Hollywood inspired drawings and sculptures would be worth investigation. I wasn’t disappointed by her luxuriously visceral depictions of the stars and starlets of the golden era of Hollywood. I was intrigued by Nina’s photo booth and could not resist trying it myself. I now have a keepsake to treasure forever of a brief encounter with a cardboard cut-out Ingrid Bergman.

By 3pm things had calmed down and the artists were given the opportunity to mingle with the public and visit each other’s stalls.  As well as the opportunity to play Hook the Brain or meet your balloon alter-ego courtesy of Maria Teresa Gavazzi, Ian Dawson’s Copy Shop attracted professional artists and beginners to try their hand at screen printing images of contemporary artworks. As an art collector it was very confusing to see Gavin Turk screen-printing a copy of his own Turk/Sid Vicious image – was the print he made of a ‘copy’, now an ‘original’??

Joining the Brick Lane regulars were the local teams The Royal Standard and Double Negative who had created works to sell but being new to the event were lacking in the showmanship which entertains people who find themselves at a contemporary art event by accident and want value for their £3. 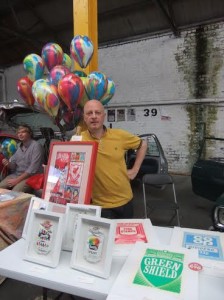 The fair closed at 4pm with just a few punters remaining. Everyone appeared to have had a good afternoon and those who wanted a prized Peter Blake print had been able to get one. The event was not of the scale of the Brick Lane event and there was no live music but anyone who had travelled to Liverpool for the fair could also experience Liverpool and the Biennial as an added bonus.  I spoke to a number of my companions from the queue after the event and their opinion was that they had expected the fair to be of a smaller scale than they are used to in London. It was a pity about Peter Blake cancelling but Liverpool had given the visitors a very friendly welcome and would certainly come again.

The artists I spoke to all had a deep affection for Liverpool but it was agreed that it was much easier to attract well known artists to the Brick Lane event because many of them live or practice in London. The only complaint I heard after the event was that some locals could not find the venue and missed fair.

I’m optimistic that the Liverpool VACBF will not be a one off; Ashton and Hayward are already talking to a larger Liverpool arts venue with a view to having an event which combines an evening Art Car Boot which a night of music.

As, for me the next stop on the VACBF tour is Folkestone on Saturday the 30th of August. The stalls will be setting up as part of the Folkestone Triennial; Tracey Emin is headlining the list of stall holders.

Review: Bluecoat: In the Peaceful Dome