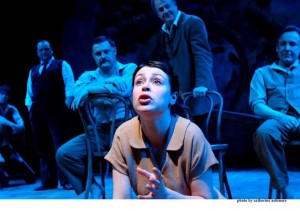 Perhaps one of Dylan Thomas’ best known plays, Under Milk Wood is enjoying a successful run at the Playhouse Theatre this week to mark the centenary of the playwright’s birth.

Thomas tells the tale of twenty-four hours in the life of a small, fictional Welsh fishing village called Llareggub, where almost forty characters live. The simplest of narratives is woven into a complex structure, as the huge variety of characters are performed by a small cast, each playing up to four or five different parts throughout the performance, which can make this particular piece a challenging watch.

Not so for this adaptation of the original radio play; directed by Terry Hands and starring his company of Welsh actors, this is a superb rendering of the timeless tale. With such an elaborate set of characters, it was great to see how each actor, with a subtle tilt of the head or lowering of the voice could transform into a new persona completely. Production design by Martyn Bainbridge also helped, as the simple, plain costumes made the company uniform, and so every character trait came straight from the actor’s charisma and talent, rather than costume changes and disguises.

The story begins whilst the citizens of Llaregubb are deep in sleep, and a pair of narrators wander into the village to demystify the affairs and eccentricities of the interesting residents there from sunrise until sunset. From drunken sailors and star-crossed lovers, to murderous husbands and cheating wives, Thomas presents a cast of highly unlikeable characters, each somehow boasting their own unique and comic charm, making them improbably sympathetic in spite of their foibles.

My favourites of the play included Mr and Mrs Pugh –  an obnoxious and cruel woman whose husband secretly plots her demise in multiple extravagant daydreams throughout the day, whilst Mrs Pugh chews her food. Played by Sophie Melville and Richard Elfyn these two actors really stole the show for me. Other great characters include the obsessively clean and tidy Mrs Ogmore-Ptitchard (Hedydd Dylan), who dreams of her two dead husbands Mr Pritchard and Mr Ogmore, demanding they recount their daily chores to her as she sleeps.

The set itself also deserves a mention, as the beautifully simple stage comprised only of a few chairs and a curving, tilting ring around the performance space upon which actors could climb, lie and sit, enabling them to embody each new role. At the back of the stage is a huge, globe-like sculpture of  Llaregubb, about which a sun moves throughout the performance, indicating what these gossiping villagers are getting up to at each hour of the day.

Highly energetic, funny and original, this new adaptation of a classic definitely deserves a watch!

Under Milk Wood continues at the Playhouse until Saturday 24 May. Book your tickets here