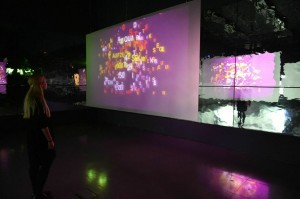 Charting the history of the association between text and the moving image, FACT’s latest exhibition explores our relationship with text-in-motion, drawing on popular examples from television, advertising and avant-garde art filmmaking.

Type Motion invites visitors to interact with the exhibition in order to fully extract the added value of the visual experience. It’s no surprise that as you wander through the exhibition, the outcome of your experience is largely affected by movements – both your own interactions and the flow of the works themselves.

The show begins before you’re even ready – as soon as you walk into the building, a set of suspended orange panels welcome you from the distance. Although visually distorted at first, the assemblage reveals itself as the letter ‘A’. Why the letter ‘A’? Is it implying the beginning of something or an excellent grade perhaps? Either way, starting Type Motion with the first letter of the alphabet is representational, but nice. The planks may be static but nonetheless, moving text is achieved through the movement of your own body. It’s slightly ironic but contradiction seems to be a charming theme that runs through Type Motion.

An interactive element asking for gallery visitors’ contributions for an evolving display is the all-time favourite. It ticks the box for audience participation and is after all, the coolest thing at the moment. Development Lab in the atrium allows everyone to doodle text related notes. I love how FACT has bent the rules and placed the comments section at the start; next to the entrance instead of in the usual secluded corner near the exit. Having the voice of previous gallery visitors as one of the very first things you see instantly acts as a catalyst for future audiences’ interactions. 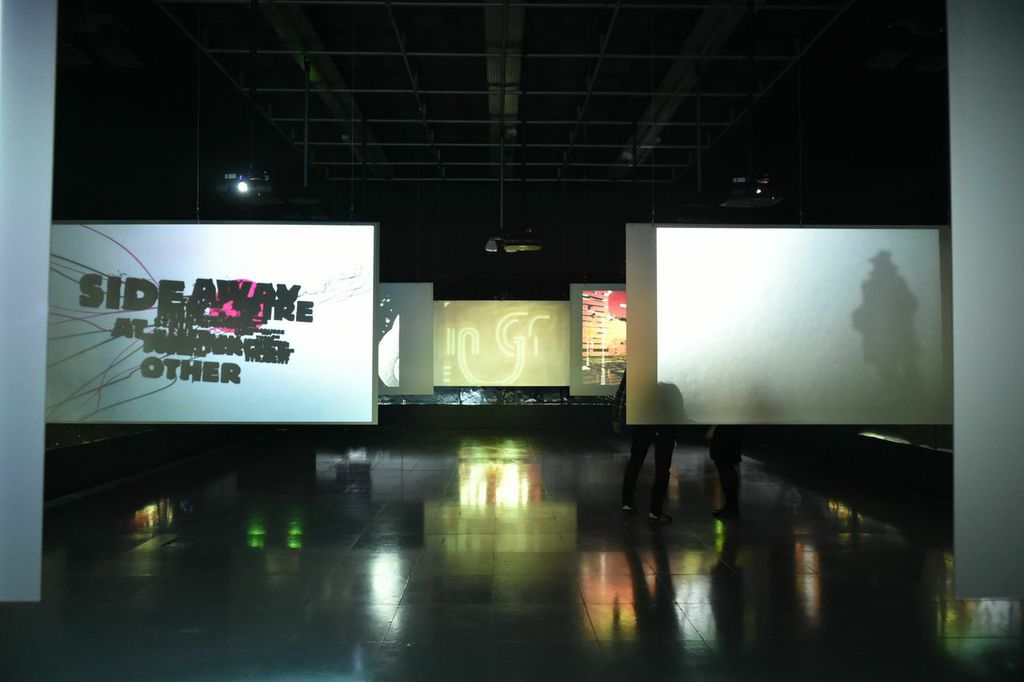 Moving on to the main part of the exhibition… Gallery 1 immerses whoever walks in, into an infinite pool of projections. Another set of panels is also suspended in this room; used this time to project moving images on, including recognisable and iconic images from cinematic auteur Alfred Hitchcock. It may strike a chord for noticing familiar texts animated within the space but personally, I don’t think this matters. The projections of these texts is a true reflection of the text overload that we all face on a daily basis; there is also no restriction between you and the billboard-like screens. You are able to change your distance from and angle towards them as you freely roam around the space, whilst at the same time, the silver mirrors which encase the room automatically reflect all actions generated by you. Unlike the calculated experience of blockbuster cinemas, the outcome of this gallery is based on the individual’s awareness; to experience something so organic in a space such as this is a nice paradox. 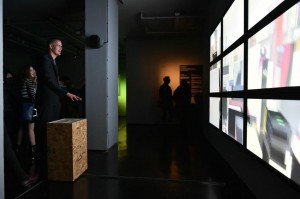 More works can also be explored upstairs, in Gallery 2. If you have a fear of heights then brace yourself for the next level of digital-bodily encounter. Flying through the sky of a cartoon city, Leap Motion is a thrilling experience that gives you access to a countless amount of text-in-motion works as you strategically crash into billboards on skyscrapers. Playing on this machine is so fun much; totally worth the motion sickness, and after-effects! It’s almost a shame that there is only one available for the exhibition.

Next to it is another interactive machine – the Multitouch Surface. This is an open archive that allows you to discover and create a playlist of text-in-motion works of your choice. Once you’re done, you can watch these clips on the big screens in the gallery. The concept of creating a playlist from an archive may not be an entirely new thing but displaying something based on personal selection in a public space while you are there is a fluid way of achieving co-curation. You will definitely find something that you like from the range of video art, commercials and even TV avant-garde amongst many others. Give it a go – at least once because copyrights have not allowed Type Motion to make this archive available online! 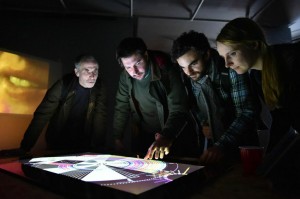 To make things even more interesting, you can even compare these interactive ways of exploring the archive with the old-school approach. In the last part of the exhibition, visitors are invited to sit on wooden benches in a small cinema room and watch a series of films scheduled to be played throughout the day. Presenting text as it is commonly known in the world of cinema, the texts in one of the films I watched show type as a supporting instrument – the subtitles for a silent film. Text is often commonly perceived as a means to deliver a message, and can be considered as rigid because of its linear and static nature. In spite of this, text has infiltrated through a wide range of genres and has been used in a countless number of countries – which you can clearly see throughout this exhibition.

Type Motion is an exhibition that allows FACT to prove its reputation as the leading organisation for presenting digital and new media art in the UK. This is a show that reinstates the institution’s promise to allow people, art and technology to meet, and ironically, it is the human touch that completes this digitally-saturated exhibition. It is certainly hard to deny the charm in it.

Type Motion is a free exhibition at FACT and continues until 8 February 2015.