Liverpool based artist Tabitha Moses’ new exhibition explores skin, and particularly the ‘relationship between the mind and the world’ and will be, 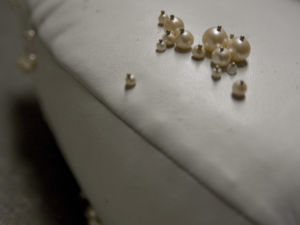 as curator Moira Lindsay highlighted, accompanied by tours and talks over the coming months.

The exhibition space itself assisted in shaping the organically growing theme of Tabitha Moses’ work:She was fascinated by Room 2 of the gallery and museum, which used to be, in gender separated Victorian society, the common room for female students of Liverpool University. Tabitha started out by researching psychological and medical conditions specific to women and used medical photos displaying the twisted limbs of ‘hysteric women’ as inspiration. (Tabatha instantly highlighted, in our brief exchange that the symptoms of hysteria were not as gender divided as often suggested – there were ‘hysteric men’.) But being aware that the Victorian notion of hysteria has been ‘overused in the visual arts’ lately, she wanted to approach the concept from a more contemporary perspective. While discussing what she was working on with friends some mentioned that they were suffering from skin diseases – including psoriasis and eczema. These conversations turned into interviews, which in turn have been incorporated either directly into the objects on display or indirectly as titles for them.

Tabitha Moses has created two sets of objects: One set a number of limb-like cushions (could be arm,
could be leg) with beads and entomology pins protruding from them simulating skin diseases, the other three thin chiffon fabrics that are stretched tightly on frames and feature embroidery in patterns, likewise 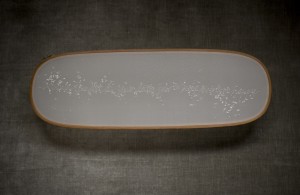 , reminiscent of skin disease. A thin thread connects the embroidered ‘blemishes’ on the chiffons as if someone has connected dots using a pen and revealing an underlying message – a short isolated excerpt from the interviews. But despite the craftsmanship what really makes the exhibition wonderful is how all its aspects come together: Tabitha Moses has managed to create an exhibition that is seemingly simple but complex. To me the real big achievement and depth is here: art that interacts with the setting and the history surrounding it; that challenges perceptions by turning physical and emotional discomfort into objects of beauty. Art that is gently political, silently subversive, thought provoking, (darkly) humorous and even potentially therapeutic. 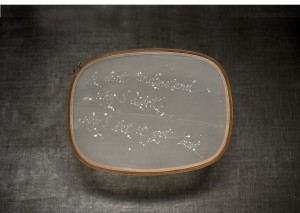 It is the richness and breadth of associations that just come up that makes it all so wonderful and
worth giving time to. Just some of my own – as I don’t want to override yours – include thoughts about body image and how we use tattoos to beautify skin but shun and are judgemental of ‘imperfections’; how those that self-harm use physical pain as a mental release, yet the physical discomfort and pain created by the skin diseases cause mental stress in those interviewed as part of the project. Listening to conversations around the room it was clear that others were interacting with the work similarly in their own subjective way, some sharing stories and memories; that there was both emotional and intellectual engagement by most present. The exhibition encourages this free association further: a panel on the wall lists definitions of words like itch, prick (noun and verb), trauma, hypochondriasis, sublime and subliminal – and you can take an extended printed list away with you. It is the pared down style of the objects displayed that provides this freedom to interact and that left me, to quote someone else’s feedback, ‘In awe of talent. And craft. And Humanity.’