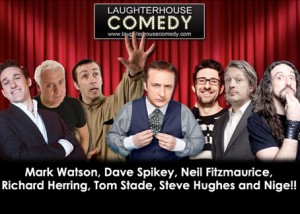 A night showcasing the entertaining talents of six comedians left the audience wanting more, as household names took to the stage beside up-and-coming stars.

The show got off to a poor start, with Richard Herring as the first act of the night. As one of the acts heralded on Twitter by the Phil prior to the event, and listed as being of Russell Howard’s Good News fame, I can honestly say that I was shocked and appalled at the gross level of ‘joke’ that he brought to the fore. Announcing “I am not sexist, but…” before launching into a tirade of offensive and needlessly inappropriate gags of a crude (and verging on homophobic) nature, Herring was truly the worst act of the night, and had no business sharing a stage with the other comedians. As far as opening the show, Herring did a very poor job, lowering the tone and leaving much of the audience cringing with embarrassment as he laboured his innuendos until someone cracked a smile.

The MC for the night, scouse comic Neil Fitzmaurice was suitably enthusiastic and full of energy as he hyped up the theatre before each act. ‘Fitzy’ has a loyal and local fan base here in Liverpool, yet a few of his anecdotes made it clear why he remains the presenter, rather than the main attraction.

Thankfully, after this worrying start (and at £20 -30 per ticket, we were becoming concerned), each comic brought a fresh, funny and original brand of humour to the stage.

Next up was Australian ex-pat Steve Hughes, whose surreal physicality on stage mirrors his tales of tourism to the Wirral and beyond! Hughes’ laid back, gentle and naturalistic delivery immediately ingratiated him with the crowd, as his friendly story-telling method raised howls of laughter from the whole room. Having travelled the world, and currently living seasonally between Britain and Australia, Hughes certainly has a few stories to tell, and it is this honest, anecdotal style of comedy, grounded in real life which appeals strongly to a modern audience. What I loved most about Hughes was his laissez-faire attitude to his set, as he didn’t try to force the laughs from the audience; instead he gently teases hilarity from his spectators with a hippyish grin.

After a short interval, and the first traffic jam at the bar, Tom Stade took to the stage. Opening with a piece about Boots vouchers brought huge laughs from the audience, who didn’t expect such localised humour from an American. Ripping on the apparent discount offered by the chemist through £5 off No & products, there were a few heads nodding in agreement at the irony in a recession. Stade’s stage persona is that of a drunken youth refusing to face middle age, and his jokes and anecdotes resonated with the audience, such as hilarious tales about raising children.

Local comic Keith Carter brought his character ‘Nige’ to the stage – a foul mouthed and drug-riddled Toxteth lad, ‘Nige’ jerks and rambles with the after effects of a lifetime on acid. Carter’s humour is grounded in the underworld of drug deals, gang wars and the job centre, mingled with spaced out interjections including the unforgettable line: “what do rooms get up to when you’re not in them?” Brilliantly original and funny, Carter should take the musical numbers out of his set (comedy songs are always made predictable and less funny by the obvious rhyming couplets) and focus on the heart of this great character.

Which brings us on to Mark Watson, the comic I’d been waiting for all night. Awkward, nervous and brutally honest about his personal life, Watson captures the hearts of his audiences. His twitchy, boyish stage persona feels real and accessible, and on this occasion he really opened up to the audience, sharing with us stories of a dark time in his life (Watson battled with alcoholism in recent years due to stage nerves) in a way that allows the audience to feel closer to him. Watson, as ever, was quirky, intelligent, different and of course funny, and in my eyes, should have been the headline act.

Unfortunately, headliner Dave Spikey is not my favourite stand-up, and his style of comedy comes across as quite old fashioned and a little slow. His set, I found dull and unimaginative, as after laboured attempts at one-liners, he turned to reading out amusing newspaper headlines and playing silly song lyrics off a laptop. Much of the audience really enjoyed this final set, and between Spikey’s headlines and the numerous trips to the bar (there were 2 intervals which caused nothing less than a stampede) he really raised the roof. Although this lazy brand of humour isn’t for me, it seems Liverpool, especially the older generation, has a soft spot for Spikey.

With thanks to Liverpool Philharmonic and Bill Elms