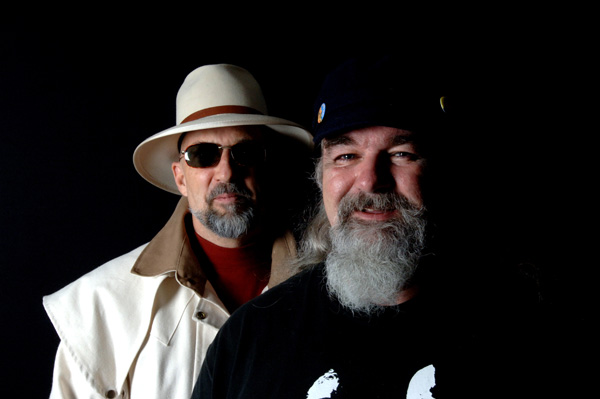 “WE ARE THE MAGIC BAND – AND WE’RE PLAYING THE MUSIC OF CAPTAIN BEEFHEART!” shouts a gravelly voiced John ‘Drumbo’ French, an original Magic Band member, announcing the start of the gig, the start of the first set, and the introduction to the first song, My Human Gets Me Blues. Suddenly, without pretence or hesitation, the bombardment of sound thunders out into the relatively average sized yet ram-packed room of The Kazimier, on the raining and cold evening of 8 November 2015.

With the ever-changing time signatures of prog, and the vocals echoing those of the Captain himself, the band power on through guitar riffs and drum beats. Shouting and screaming vocals – low and high, and laughing, cackling out lyrics of pioneering rock’s past; When It Blows Its Stacks, Nowadays a Woman’s Gotta Hit a Man, and Circumstances are just some of the intriguing songs on the setlist. The band, however, have not aged one bit. By this I mean one and only one original member is performing tonight. Unfortunately, we are told due to previous ill health, a now recovering Mark ‘Rockette Morton’ Boston, could not attend this run of The Magic Band’s tours.

John French, singer, tenor saxophonist, harmonica player and drummer, leads the band centre stage, accompanied by Eric Klerks, Andy Niven, Max Kutner and Brian Havey. One singer, one guitarist, one eight-string guitarist, one drummer and one keyboardist hiding in the corner – The Magic Band of the 21st first century. There is a great level of talent on display on stage, each musician is equally as talented as the last, making for an incredibly tight performance.

Lights frantically scan the room, flecks of light from a kind of mirror-chandelier cover the space. The floor buried under a sea of fans, both old and young; the older fans making remarks between songs about seeing them back in the good old days. And to the perfectly executed music the audience appear to be in a 1960-70’s head bobbing, body swaying trance of psychedelia nostalgia and awful dancing – but in a good way.

Following the first hour-long set, the evening feels like a bizarre late dream. The interval is abruptly ended as a lone John French appears on stage and begins beating the drums and smashing the symbols; the start of an impressive drum solo that lasts a good few minutes before the rest of the band joins French on stage. All except the drummer, who remains backstage for a couple of songs while French, or ‘Drumbo’ as Beefheart himself nicknamed him, indulges his passion for drumming – and he is a talented drummer, too. But, unfortunately for him, it does prove rather difficult for a drummer to front a band.

Once French returned to his post, centre stage, and drummer returned to his drums; the second set had fully commenced with the same flare and electricity that burned and hummed and crashed it’s way through the first set. Playing songs such as; On Tomorrow, Bat Chain Puller, Steal Softly Through Snow and Electricity.

During this half of the performance, I began thinking to myself that this music is colourful. It is bright and daring and feels alive. Completely contrasting the mediocrity of the majority ‘surface’ chart music; that is all beige and similar, and dull.

And in true Beefheart style, everything here is consumed in a deluge of sound; the music is everything. Clashing sounds, crashing sounds, harmonising sounds; all in epic and fantastical compositions. Overwhelming the eardrums and washing over the crowd of fans, in awe – their faces say it all; closed eyes and smiling mouths singing along. Satisfied expressions from the perfect dual-riff in perfect sync. Interlacing of blues, hard rock and psychedelia, the common misconception of ‘experimental’ music is proved so evidently wrong. That it is conceived haphazardly, is untamed and unpracticed. Because out of all this evening I see something pure and incredibly tight which can only come from extensive rehearsal.

Do they live up to Captain Beefheart? I would say…almost. They absolutely do him justice, even if his genius is lost in time. But, what of The Magic Band? They are excellent. They spill and they pour and throw and spit out this music, this tribute, with ease and with pleasure and absolute passion. It is very obvious from this performance that fans and musicians alike are consistently influenced and inspired by this excellent music. The end the second set and subsequent encore, following a sincerely short off stage on stage interval, saw the end of an evening of soul restoration, smiling faces and incredible talent making incredible sounds. If ever given the opportunity to see The Magic Band perform live, should you go? Absolutely, you should.

Find out what else is coming up at the Kazimier here.