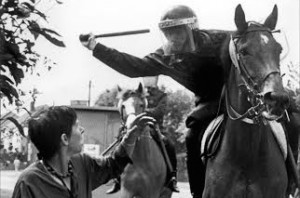 Fall Out Factory, an independent gallery on Dale Street, recently hosted an exhibition of photographs recording the Miners Strike of the 1980s, with images taken by ReportDigital, whose photographers lived with the miners on the front line during the most intense years of the strike.

We all know the background of the strike; a government hell-bent on breaking up the unions, their economic plan to reduce interest rates and to diminish the work force of the UK at the same time. Their plot only just succeeded, as the unions and the mining community fought a long hard battle against the establishment to defend their working rights and way of life. Throughout the strike, the government fought a dirty campaign to make sure they broke down the power of the unions, along with the will of the people, by starving them into submission.

The photographs in the exhibition showed the passion of the workforce and their families on the front line, who were all fighting a well-organised police force. Those police regiments adopted military precision in their tactics, thwarting the best efforts of the miners and their supporters in picketing the collieries.

The images by Report Digital showed the steely resilience of the miners’  wives and girlfriends who took the fight to the front line of this battle. The photographs show the despair that was being felt as the prolonged industrial action took it’s toll on the striking miners and the frustrations as some of their workmates had to break the strike and return to work. The strike breakers’ actions drove a wedge through those communities, leaving scars that to this day, remain unhealed.

The photographs in this exhibition were a stunning record of a part of our political history that changed the United Kingdom forever, documenting a government ruthlessly intent on getting it’s own way at any cost, and the ordinary people fighting against the establishment to save their jobs and the communities they grew up in.

You can see more of the images in Report Digital’s online archive here, amongst photographs taken throughout other key political moments in UK history.

In Pictures: Liverpool School of Art and Design Degree Show 2014