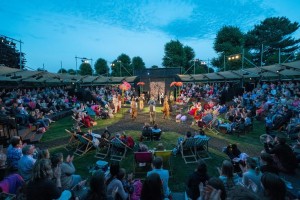 Grosvenor Park Open Air Theatre know how to do comedy, that’s for sure. Last summer, I was lucky enough to have the opportunity to attend A Midsummer Night’s Dream (review here), and this time around for The Comedy of Errors, that magical experience continued.

Artistic Director Alex Clifton has managed proceedings for five years now and the increasingly high standard of production, as well as the incredible performances from the hugely talented cast the company has brought together, are testament to his vision. Clifton set out to provide an experience that would “captivate and entrance” his audience; a success of which he can be sure.

This year’s season of “carefree picnic theatre” includes Shakespearean farce The Comedy of Errors, an adaptation of children’s classic The Secret Garden, and bloodthirsty tragedy Macbeth. Having little prior knowledge of The Comedy of Errors, I decided to unashamedly avoid reading up on this particular piece of literature and let the live production, as last time, speak for itself.

The premise of the story is this; two sets of identical twins, separated at birth in truly fantastical Shakespearean style grow up in two faraway cities. When unforeseen circumstances cause one mismatched pair to turn up in the home city of the other, a ludicrous and highly entertaining case of mistaken identity unfolds, resulting in unfounded accusations, misguided seductions and a bizarre string of confrontations none of the characters can even begin to understand.

The show opens with a rag-tag troop of characters performing a series of old fashioned Cockney knees-ups – a musical introduction to the array of contemporary pop hits that would seamlessly punctuate the night’s performance. Kathryn Delaney’s husky southern twang led the chorus, with Max Gallagher’s unexpected proficiency on the accordion providing the musical accompaniment.

The supporting cast were brilliant throughout, providing light relief with slapstick cameos as well as narrating the story with a series of musical interludes taken from the unlikely songbooks of Sinead O’Connor, Whitney Houston and Britney Spears. If this sounds completely out of place, think again. The soundtrack to the show, overseen by Musical Director Harry Blake is perfectly pitched and surprisingly in keeping with the tone of the play, expertly overlaying verses of flamboyant iambic pentameter with a simple recognisable hook.

As well as helping to ‘translate’ the story for the modern audience, these tuneful additions provided the opportunity for the actors to show off their musical prowess, with a full live band making the midsummer performance even more magical.

The two sets of twins, played by real-life twins Danielle and Nichole Bird (Dromio of Ephesus and of Syracuse), and look-alikes Richard Pryal and Thomas Richardson (as Antipholus of Ephesus and of Syracuse) were brilliantly cast and expertly carried the show. A huge fan of Danielle and Nichole following their joint performance of Puck in A Midsummer Night’s Dream (2013), it was great to see the male actors hold their own besides this familial tour de force. Excellent comic timing combined with great chemistry on stage made each pair a real treat to watch.

Also wrapped up in this unlikely tale were Louise Kempton as wife Adriana, who mistakes Antipholus’ twin brother for her husband and becomes entangled in a love triangle she cannot comprehend. Her sister Luciana (Kezrena James) also falls for the exotic twin, but believing him to be her brother-in-law denies her lust. A similar fate awaits the servant twins; Dromio of Ephesus and sister Dromio of Syracuse have never met, and their presence in the same city continues to baffle everyone around them as they unwittingly cause mayhem whilst trying to set things right.

This comic classic of Jacobean theatre proves a fantastic adaptation and continues in demonstrating the capabilities of Chester Performs as a forerunner in the outdoor theatre scene. From a beautiful setting (what more could you ask for?) and great choice of programme, to the talented cast and production team, The Comedy of Errors delivers on laughs throughout and if you’re a fan of a happy ending, well, I’m sure you can guess the rest.

There are just 3 weeks left to see all three shows, and I certainly hope to catch them all before the summer is out! Book your tickets here.

Find out more about Chester Performs, their other projects and their involvement in ongoing redevelopment project RE:NEW.

Review: Transformation: One Man’s Cross Dressing Wardrobe at the Walker