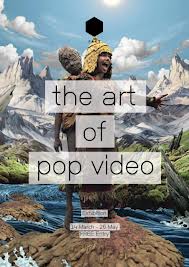 The Art of Pop Video is a surprisingly definitive collection of music videos housed at Liverpool’s FACT gallery.

The collection, brought together by curators Michael P Aust and Daniel Kothenschulte, showcases every conceivable sub-genre of the medium; from narrative to abstract videos, political to parody, animation to live action, the collection illustrates the diversity of an entertainment form that is as engrained in our culture as novels and paintings.

The exhibition itself is as immersive as the MTV channel it chronicles, as visitors step into a gallery filled with over dozens of television screens, each displaying a music video entirely different, yet related to its neighbours either side. When MTV launched on 1 August 1981, music lovers were bombarded with images to accompany their favourite tracks: this was music for the eyes, not the ears. Despite the term Music Television only coming into being in the 80s, however, music videos as a medium have been in existence since the 1920s with the advent of ‘talkies’ and even soundtracks to silent films.

An early clip of Duke Ellington in 1929 is one of the first videos on display, and illustrates an early connection between music and film as it captures some reactions to the music being played. This video is followed by an eccentric collection of others, all dating between 1929 – 1936, including a clip from the 1935 musical Tophat where music and film are inextricably linked. The absurdity of the musical as a narrative form is addressed throughout the exhibition, as Aust and Kothenschulte strive to prove the validity of the genre as part of the history of music video.

These early clips include a lot of animation, which is something still common to music video. The earliest offering in the gallery is directed by Len Lye, entitled ‘Rainbow Dance’ (1936) in which an actor moves on the screen, surrounded by animated colours and shapes, perhaps intended to create a visual representation of the sounds produced by Rico’s Creole Band. Animation is a recurrent theme, and videos by Peter Gabriel (1986) and The White Stripes (2001) explore other possibilities within the medium.

The importance of animation to music is most apparent when viewing Gorillaz’ ‘Clint Eastwood’ (2001). Without the popularity of music video, the animated characters of the band Gorillaz perhaps would not have gained such notoriety for their very unique approach to promoting themselves, and the novelty of the ‘super-group’ may have soon worn off.

In Gallery 1, we are encouraged to question the connection between what we see and hear – are the images playing out before our eyes really related to the sounds of the music? And can what we see affect our opinion of the track? This is an interesting point to consider when walking about the gallery space, as visitors can choose to stop and ponder a certain video whilst wearing headphones, or simply gaze at the screens all around and consume the images. The only tracks that one cannot choose to ignore are the songs being played over the speaker system, whose videos have been projected onto huge screens at the other side of the gallery. Listening to these songs whilst watching other videos can be disconcerting, but I could not shake the realisation that as soon as I heard the track, I could instantly picture the singer in the video. Should this be our reaction, and how important is video to music?

The connection between image and sound is also explored in Bob Dylan’s much-copied 1967 video for ‘Subterranean Homesick Blues’. In this video, Dylan stands before the camera, but his lips do not move; instead, he holds up a series of flash cards emblazoned with the lyrics of the song, jarring our perception of his relationship to his own voice, much like the marriage between film and melody in other videos.

The Art of Pop Video next focuses on the rise of amateur-style filming, and how this has affected the video as we know it. With the advent of Youtube, thousands of amateur film-makers all over the world suddenly shot to fame when their home movies went viral. This in turn influenced the music video, and ‘amateur style’ filming became an art-form in its own right. Videos such as OK Go’s ‘Here It Goes Again’ undoubtedly would not have been so successful without their viral presence, and this style of shooting has become the go-to technique for artists who want to appear gritty and ‘real’.

The amateur video has been utilised by a number of artists, from those making a mash-up or parody of another song, using internet clips, to bands wanting to send out a political message, like Russia’s punk group Pussy Riot. Although banned from Russian TV, Pussy Riots’ video is ironically a huge internet hit and their message has been broadcast all over the world. The curators here explore the way in which music video is a constantly adapting genre, evolving to suit the social, technological and political climate. Sometimes artists even make a video where the images seem completely irrelevant in connection with the song itself, yet are significant in the socio-political context.

Upstairs in Gallery 2, The Art of Pop Video explores the line between self-promotion and art. There are undoubtedly countless music videos that can be considered as works of art in their own right, and countless others which parody and reference iconic pieces of art in order to make a statement, such as Franz Ferdinand’s ‘Do You Want To’ (2005). Many videos in this section of the exhibition work as standalone pieces of art, with a narrative arc and beautiful cinematography that are just as important as the music.

Aust and Kothenschulte here explore the crossover between film and music in greater depth. There has always been a strong link, from early musical and Disney pictures, to the 1960s Beatles movies; and in modern pop videos, this link is further developed. There are many types of crossovers between music and film: soundtracks will inevitably feature clips from the film they represent, some artists choose to play out their video with a film-like narrative, and others rope in a famous actor to star, or director to create their musical film.  The ever-evolving form of the music video suggests that it is an entertainment just as important and influential on society as features from the movie industry, as stars use their videos to promote themselves and their lifestyle, their beliefs and as an outlet for other creative talent.

These endless examples of intertextuality lead to the statement posed by the curators at the end of the exhibition: ‘it is no longer certain which medium plunders which aesthetic’, as it has been proven that art, film and music are utterly intertwined.