Galápagos is group of islands steeped in natural history, beautiful habitat and is a literal stepping-stone in the mind of Darwin leading to the development of probably the most important scientific theory of the last two hundred years.  In recent years this environment has had to adapt to the growing tourism and popularity of the location as well as an increasing population, so the balancing act of conservation is one that is increasingly tricky to navigate.  This is what the 12 artists on show at The Bluecoat’s latest exhibition are attempting to raise discourse on and its brutal honesty makes the exhibition startlingly effective.

Dorothy Cross’ Whale (2011) initially distracts from all else in the space.  The piece consists of a genuine Cuvier whale skeleton hanging above a rusted bucket.  Whale speaks of an issue that is sadly still ongoing, with the treatment of whales being a touchy topic for many countries.  Yet the poetry behind the piece isn’t really what’s so distracting.  Sometimes with art being such a city-based exercise, it’s quite easy to forget the true power of nature and its effortless beauty.  The piece instantly transforms the space into something more similar to the Natural History Museum in London and is an overwhelming opening to the main space in the gallery.

Keeping with a theme of genuine and physical nature, Tania Kovats’ work seemed dark but humorous with Badger (2012).  Using the corpse of a badger killed by a car, it again raises this issue of man’s incompatibility to share the planet with other creatures; a theme that is present throughout the entire exhibit.  Kovats’ gentler Colony (2012) again looks into this issue using barnacles but seems also ironic that the act had to be reproduced (albeit in an environmentally friendly way) to raise awareness of it in the first place.

Turner prizewinner Jeremy Deller creates what is probably the most disturbing aspect of the exhibit with his film Cock Fight (2010).  Seeming to want to avoid the scientific aspect of the issues, Deller has sought to look into the traditions of the community instead, looking into aspects that are deliberately provocative and highly polarising in comparison to the conservation elements.  The film focuses on the tradition of cock fighting before it was banned a year later and seems adamant to show us the clash between tradition and progress, culture and science, man and the environment no matter how discomforting. 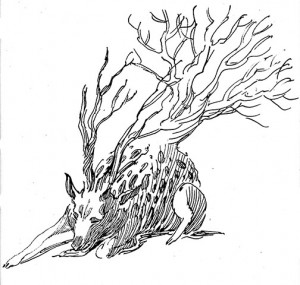 Upstairs in the space, the viewer comes to room inhabited by a lone podium.  The room is darkened and is filled with noises calculated and created from digital oscillators attached to the now endangered Hammerhead Sharks.  Lying down on the podium allows the viewer to feel the sounds and this is encouraged by the artist Kaffe Matthews who seems keen to try and bring humans and nature closer together in You might come out of the water every time singing (2012).  This again adds to the amounting guilt that the exhibition builds up in the viewer where it seems almost incomprehensible to allow such environmental destruction when we should be respectful of our surroundings.  Yet the exhibition isn’t simply a mere guilt trip.  It’s clear from the other works on display, in particular Jyll Bradley’s photography that the issue is far from simple.  The visitors to the islands in Bradley’s photographs seem so small and insignificant to the landscape yet the irony of these tiny creatures we call people are the main reason for the Islands’ environmental issues is wittily, almost sardonically addressed.

Marcus Coates’ video piece Human Report (2008) goes further in this and gives the environment a humours voice in the form of a man dressed as a blue-footed booby.  Though enjoyable and visually very funny, like the rest of the exhibition, there are dark undertones of how our race are churning up our planet in general, not just in the Galápagos.  This is however a comfortably soft ending to what is a hard-hitting exhibition that raises important environmental issues.

The islands in question seem like a microcosm for the planet as a whole, only we’re allowed to witness the slow but continuing, and eventually destructive, clash before our very eyes.  Galápagos doesn’t just work as an enjoyable exhibition of art but as evidence of our own selfishness as a species and this is not only a brave move in curation but a refreshing and much needed reality check.

Galapagos is on show at the Bluecoat until the 1st July. For more information and opening times pleae visit the website at http://www.thebluecoat.org.uk/