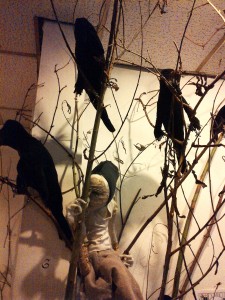 ‘The Darkening Green’ follows on from an Arts Council funded installation, ‘The Ecchoing Green’, commissioned by the Barnaby Festival at the King Edward Street Chapel, Macclesﬁeld, combining work from the previous show with new works.

Speaking to the artist herself, I learnt the inspiration behind the artwork; Wilson explained that she was influenced by the work of William Blake, specifically his poem ‘The Ecchoing Green’. This resonated strongly with me personally, as I am an avid admirer of both Blake’s poetry and painted engravings, and so was eager to draw parallels with her work.

‘The Ecchoing Green’ is a poem by Blake which features in his book Songs of Innocence and Experience, 1794, and explores themes of youth and age, establishing the link between innocence and experience, and questioning whether any one can be truly innocent. Wilson agrees that even babies can seem experienced, and that the elderly can retain threads of innocence, making the subject an interesting prospect to explore for any artist.

Aspects of both innocence and experience are visible in Wilson’s artwork, as the faces of her rag-doll figures appear at once old and young: the smaller, child-like figures are as equally wrinkled as the hunched over motherly sculptures, and all are dressed in rags and ‘found’ pieces of fabric. Wilson’s reasoning behind their tattered garments is wrapped up in the portrayal of time, and its relation to experience: each item used to dress the sculptures bears some meaning to her and her family, as memories, traumas and experiences become absorbed by the fabrics and are used to create a story. Wilson’s choice of materials seems unusual, but her reasoning is inspired, creating deep personal ties to the work.

This installation, is the first of its kind to inhabit Domino Gallery, and utterly transformed the space I am so familiar with. Upon entering, visitors are transported into a fairytale world, reminiscent of the Grimm stories, as the space is filled with branches mimicking a magical forest, sourced from Wilson’s own garden. The trees create an enclosed space which one must venture into, inhabited by twisted sculptural forms and velvety black rooks. Once within this space, one feels like an intruder: this is their world, and we are here merely to look and attempt to understand their plight. Wilson has created an alternate fairytale dimension, in which character stereotypes are turned on their heads: in the window of the gallery stands a princess figure, in a pink dress, who looks heavily pregnant with child, but she is alone: where is her prince? These innovative twists on a traditional set of ideas are the basis of Wilson’s work, and ask poignant questions, which demand deep contemplation from the viewer. 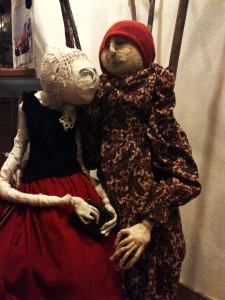 Scores of rooks unite the diverse figures in the installation, and are a member of the Corvidae family of birds, featuring prominently in folklore as ominous creatures. Rooks are traditionally able to forecast changes in the weather and sense impending death, and so an air of gloom hangs over the picturesque scene. This acknowledgement of death is wrapped up in time, and so is important to the exhibition, which manages to freeze the passage of time, as the figures presented seem without age. For example, two pieces, Girl in Red Dress and Little Girl Lost (also from the title of one of Blake’s poems) are seated together: one cannot tell who they are, but the Girl in Red Dress presents a juxtaposition of age, as she appears elderly, yet one notices a tiny teddy bear peeking from her pocket, suggesting youth.

This discrepancy is explored further in Old/Young, a sculpture depicting a woman holding a baby, whose face resembles hers so closely that is creates an unnerving effect, as the child seems as experienced as its mother. The idea of motherhood is highlighted once again in Lady with Crow, which is a sculpture of a woman nursing a bird, where one would expect to find a baby. These are just some of the unsettling images that Wilson creates, in order to encourage her audience to question the relevance of age and its perceived traits, and to understand her alien characters.

The installation was accompanied by some of Wilson’s paintings, and one which truly captured the imagination was ‘Seated Man’. This image was powerful, due to the sparse palette called upon for its creation and Wilson manages to create an enthralling image using only brown , gold and green tones. This painting stood out as my favourite piece of the exhibition, with the depiction of a lone figure raising questions about his identity, and how he came to be so solitary, facing away from the artist in a symbolic, forsaken position.

An audio track, featuring bird calls including rooks and magpies played throughout the Private View. These sounds echoed through the gallery, contributing to the eerie, ethereal atmosphere, and providing a soundtrack for the inanimate birds watching the visitors, making them come to life. The rooks themselves were wonderfully manufactured, all hand-made and totally unique.

‘The Darkening Green’ offers visitors the chance to escape into a dark fairytale world, presenting unexpected images and themes whilst questioning our societal-inherited perceptions about innocence and experience.