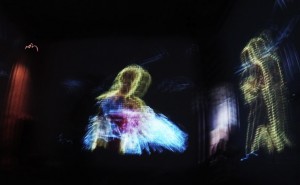 The atmosphere in 24 Kitchen Street was one of quiet anticipation and intrigue when I arrived at Syndrome: CHOROS on 21 August.

As you walked into the space, the viewer was faced with an installation of three screens all displaying the same image, which looked like a low-fi interior space or room much like you would see in a retro computer game of the late 90s.

Kinetic sensor devices stood on stands against each screen exactly central, with the screens stretched from floor to ceiling forming a cube, minus the forth side, creating a single square shaft of light illuminating a space on the stone floor again exactly central to the space. The screens and scene waited silently as the audience gathered expectantly.

An opening announcement was made to mark the start of the performance and a male performer emerged, dressed in sport casuals, tall and muscular but most notably wearing a tight fitting lycra mask with a white graphic motif. On entering the space, the sensors picked up his presence and a low-fi, grid-like aura of the performer’s figure appeared on the screens behind.

He sat cross-legged in the centre of the performance space directly central to the screens in the shaft of square light, and then rose and began a series of martial arts ritualistic movements of respect before sparring against the ‘other self’ that had appeared on the screen.  A whole animated world started to develop!

As a variety of punches, kicks and and combos were thrown, different pre-recorded sounds played. Soon the energy began to intensify and the performance felt more immersive, rather than demonstrative from an audience perspective. The performer became more engaged in the relationship between himself and his graphic shadow partner which really drew the audience in, making it no longer feel like you were watching one person, but a brawl between four.

The performance drew to a close as the performer stopped sparring, bowed and left the space. The audience was then allowed to move into the installation to interact with it, which gave me an opportunity to talk with the creators of the installation about the immersive features of the piece.

What was not obvious to discern from the performance was that each screen had a bank of sounds which played when a sensory connection was made, for example when the punches were thrown by the performer. The sound could then be ‘pulled’ from one screen onto another and this resulted in creating many layers of sound, thereby enabling the performance to layer up and create a fully three dimensional experience. This feature was hard to detect in the performance itself as the viewer sees the piece simply as a whole; you would not be able to detect this without being in the space. It was really exciting to learn this retrospectively, however, and the possibilities to create fluid and individual experiences and connections with the art brings so much potential to be explored outside of a video game-like work.

This was an exciting, sensory mixture between a sophisticated creative concept and interactive technology. Beyond the computer game format, the idea of having a space where you can spontaneously compose and experience art is exciting, and bears many possibilities in the future both for creating and experiencing work. As demonstrated in this installation, this process can be synonymous.