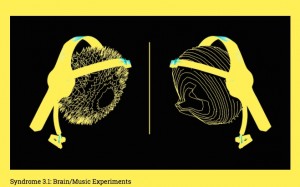 This fascinating event explored how augmented performance can be used in the field of arts and disability, focusing in particular on deaf musical performance as part of DaDaFest 2014.

Brain/Music Experiments was a collaboration between Syndrome, (exploring augmented and post-human performance), Frozen Music Collective and Music for the Deaf, with each combining their own philosophy and artistic vision to create a live, fully scored performance.

Taking place at the Bluecoat, the space was set up with a large central screen, an electric piano keyboard to the left and a condenser microphone to the centre right. Off to the side of the space, the Frozen Music Collective set up their equipment and computer, and in the central part of the stage was a bass woofer surrounded by a scaffold set up for a cymatics experiment; the study of visible sound co-vibration.

The performances began with Ruth Montgomery, who played a beautifully delicate and impressively dexterous improvisation on the flute. Towards the end of this piece, other technological sounds began to interweave with her playing; a low hum and other random non-musical sounds such as a low level theremin which, for lack of a better description, created a sense of pure science fiction.

Following this, the Frozen Music Collective shared discussion about how they use technology and science to create visual art from the electromagnetic energies emitted from the brain in response to stimulus and levels of brain activity. This discussion  explained the images which appeared on the main screen throughout the performance, which depicted a chart showing the spectrum of brainwaves; delta, theta, alpha beta and gamma and their associated frequencies. Colour bursts and pulses had been appearing on the screen during Ruth’s performance, and I spotted that deaf pianist Danny Lane, though he hadnʼt yet played was present on stage and wearing a small electrode on the side of his head.

The electrode was part of an EEG set up that had been recording impulses from Danny, in particular muscular impulses from blinking that were triggering the bursts on screen. The signals were processed through the computers and software that the Frozen Music Collective were using live and were to come into play as the experiments progressed through the improvised duets between the musicians.

Alongside the technology, the improvisations drew upon the parallels between the musical direction and British Sign Language (BSL), an invaluable tool that has helped these musicians during their research and rehearsal process via Skype in the run up to the performance.

A mimetic performance from Ruth ʻjugglingʼ communicated in a tangible way to the audience how the two were closely related in creating a way of interpreting action and response to make music. The way the performance transitioned from live musical performance to tech demonstration was fascinating and even though there were some things which did not quite go to plan technically, you felt part of the experiment as you were learning alongside the amazing neuroscientists and coders that worked to keep the connection between what they were both measuring and processing to perform with simultaneously.

It would be impossible to explore in depth everything I witnessed and learned here, but one of the most profound things the experience left me with was the revelation that the physical sense of hearing should not be, and evidently is not a hinderance to a deaf musician. Plenty of hearing people are not musical and as a musical person myself, it made me reflect on what exactly it is within me that responds in order to have an innate ʻfeelʼ for musicality, as well as to be able to process and produce music in response to that.

I saw how studying music theory and learning to read a score might allow someone to master co-ordination in solo and ensemble work but the fluidity and imagination required to improvise is by no means an obstacle only for a deaf musician. Having a dedicated group of collaborators all asking the question ʻWhere does music come from?ʼ was what made this event so special and culminated in a superb evening of ʻexperimentʼ that left you inspired, whether you are a hearing person or part of the deaf community.

This event was part of DaDaFest 2014 and took place at the Bluecoat. You can find out more about future Syndrome live art events at www.syn-dro.me

Review: The Liverpool Nude – An Exhibition of Work from Merseyside’s...