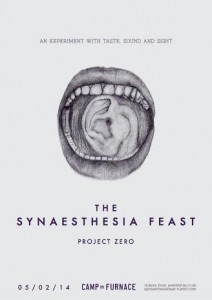 Synaesthesia: A condition in which one type of stimulation evokes the sensation of another, as when the hearing of a sound produces the visualisation of a colour.

Billed as “an immersive and heightened dining experience”, we were excited to try out this new way of enjoying food. Both veggies, and always looking for fresh new ideas when it comes to eating out, my partner and I were excited and had high expectations of the event – unfortunately, we had set our hopes a bit too high.

As we walked into a desolate gallery space upstairs in Camp and Furnace, we had out coats taken by someone wearing a lab coat (why?) and were ushered into a freezing cold room, laid out with a long trestle table, and a cameraman at the head. At no point during the introduction, the ticket buying process, or even the original advertisement did anyone ask us if we were comfortable being filmed whilst eating (an experience many find embarrassing in public to begin with) and I found this very presumptuous on the part of the organisers.

Next, we were asked to put on blind folds, and the first course was laid in front of us. The sensation being tested here was “Crunch” and we were served Vegetable Tempura with rosemary and garlic infused dipping salts. This was accompanied by haunting, trippy music played through the speakers (disappointed this wasn’t live) which in no way resembled the sensation of “crunch”. Likewise the food was almost too salty to stomach, and had very little in the way of “crunch”.  Needless to say, things were not off to a great start.

After each course we were invited to write down our thoughts, including our experience of taste, sound and visuals. I found it somewhat ironic that artist Jess Doyle had been providing visual stimulation in the form of projected lights throughout this course, given that we were all blindfolded.

For the rest of the evening, the food at least got better and better – Gina Tsang did a wonderful job of putting each course together, and every dish delivered on taste, as well as a connection to the sensation proposed by our menus. From orange and watercress soup, with a hazelnut pesto and goats cheese crouton (divine!) to the macaroons and garden infused tea as the petits fours at the end, the food certainly demanded praise. The polenta and asparagus dish was tasty, if a little sloppy, and the UV jelly quite pointless, but apart from that, the food won us both over.

The other stimulation though, was very disappointing. As an art event, I was expecting a lot, especially due to the interesting way in which the art and music were supposedly created:

“Each artist was given a set of guidelines to follow based on psychological research in to weak synaesthesia. Synaesthesia is thought by some to be on a spectrum and although not everybody has synaesthesia, we all make correspondences between different sensory dimensions. For example most people would correspond the taste of lemon with a high-pitched sound and a spiked shape.  The artists used these shared associations to create their work.”

As far as I am concerned, there was no synergy between any of the courses and the accompanying music/visuals. The music playing each time a dish was served was incredibly similar to the one before – each instrumental piece was haunting, disconcerting and quite bland, and in no way coordinated with the flavours on the plate. The above example of a lemon suggesting a high pitched sound is exciting, yet this synergy was completely lacking in the evening’s music, which left us wondering what relevance it actually had, and why it could not have been presented live?

The visuals were even less stimulating, and equally unoriginal in that every course was accompanied by glaringly similar lights and patterns on the ceiling. The artist could have achieved a lot more, given the brief, than an amateur-looking projection show. Even the space was not used to its full potential – a huge white room, with walls perfect for projecting perhaps a short film or a bold and interesting image of a piece of art, and yet the visuals provided were lost on a ceiling covered with large beams which hid much of the projection.

Unfortunately, I had been expecting a lot more of an overall sensory experience, and was left wondering why the organisers bothered with the “art”, as food and conversation were the real stars this evening. That being said, the organisers have covered their backs quite well, by stating that “not everybody has synaesthesia”. True or not, everyone has the ability to see the difference between good and bad quality music and art, and I’m afraid this evening fell into the latter category. A great, original and creative idea, executed rather poorly, Synaesthesia Feast could have been so much more. Next time, the creators of Project Zero should look to Videojam for inspiration – an art collective who are true masters at delivering a multi-sensory, stimulating and immersive event.