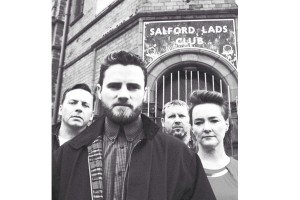 Set in present-day Northern Ireland, Billy Cowan’s script follows the misadventures of Tommy, a Northern Irish man who has escaped his small hometown outside Belfast for a high-flying career in Manchester with his partner. Driven to return home by his sister-in-law, he finds that his brother Dave has been selling drugs and gotten in trouble with the local paramilitary forces. A tale of love, lust and betrayal unfolds, as the characters become entwined in a web of romance, family loyalties and fear of the socio-political climate.

This emotionally-fuelled story is held together beautifully by a soundtrack courtesy of the Smiths – Johnny Marr and Morrissey were approached by the team and approved the use of their music for this play. The inclusion of songs such as There is a Light That Never Goes Out  is paramount to the success of the play; The Smiths soundtrack oozes out of the PA system in times of romance, tragedy and despair, with Morrissey’s ever-recognisable voice and the powerful melodies providing another level to the narrative arc and action on stage.

In a discussion after the performance with the writer and cast, Cowan related the tale of his own youth growing up in Northern Ireland, torn between warring religious factions and admitting his sexuality. In the 1980s, music was an escape for Belfast’s gay youth and Cowan and his friends, from both sides of the religious boundary, came together over a shared feeling of being outsiders, and a love of The Smiths.

What is most captivating about the play is its authenticity; from the actors’ pitch-perfect accents to the raw emotion portrayed throughout the show; the references to social unrest to the everyday issues facing modern-day families, the events in this story shriek reality. Cowan focuses his storytelling efforts on a plausible and sympathetic microcosm to address the wider issues and social strains happening throughout the country, affecting the wider community.

A story of love, loss and reconciliation, Still Il is ultimately a romance in the truest, most Shakespearean sense of the word; tragic, and punctuated by death and deception, the characters fight against their innermost yearnings to adhere to society’s strict rules, sacrificing their morality and desires to horrific consequences.

After the show, an audience member asked if the play could ever travel to Northern Ireland; Cowan admitted that the likelihood of this is low, and the play would be better suited to a run in Dublin first. Cowan’s ‘Irish’ plays (including a portrayal of a gay paramilitary) are unwelcome in his hometown, however, his other less controversial works are welcomed in theatres across Ireland. Is Cowan trying to say that the troubles in Northern Ireland are a hopeless case? I think the way he portrays his homeland is hard-hitting and brave, and if anything, Cowan is telling his audience that Northern Ireland may not be ready to settle for peace, but in the meantime the rest of the UK needs to learn the ins and outs of this fraught community and understand why the inexplicably named ‘Troubles’ have taken so long to set right.

Homotopia continues until 11 December 2014, with exhibitions at Tate running into 2015. For the full programme click here. For more events happening at the Lantern Theatre, click here.

Review From Kirkby With Love – Portraits Celebrating Local Communities by...