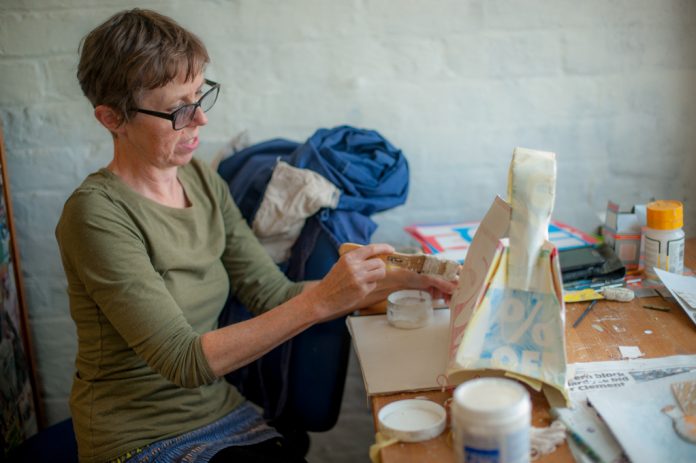 Eimear Kavanagh & Eilis Ní Fhaoláin have finished their residency, and their exhibition is well drawn to a close, but take a look through the images of this exhibition, and it’s not hard to see why there’s already talk of further exploration of this exhibition within Liverpool Irish Festival 2016.

The exhibition last week at Road Studios was the result of an experimental residency exchange between Road Studios and Backwater Artists Group in Cork, Ireland. It bore all the energy of a residency, and all the constraints of Ryan Air’s hand luggage at the same time. And in my books that’s a recipe for something pretty spectacular.

OK, so you’re not going to get a particularly finished thing – object, work, project, thought process, whatever – but what materialises is a series of genuinely interesting thoughts that are very visible through the work in the exhibition.

What was even more exciting was the differences in work between the two artists that had resulted from the different constraints they’d had to work to over the last couple of weeks. They both have to travel with their work, but Eimear already has, Eilis hasn’t actually found out if her careful planning has worked yet.

Eimear’s work was part scrunched up, part erratically folded, and part flat-packed to get here. It was so incredibly apparent, and provided such a satisfying fix of inquiry for me as a viewer, that I found myself staring at the process almost as much as the work itself. Whereas Eilis’ work had all the hallmarks of something planned, something ready to be taken to pieces and packed at the bottom of her hand luggage back to Cork.

The residency was originally penned as a “visual fact finding mission” and grew into the more specific documentation of “the journey they have made in all senses of that word.” By the time it was finished the real focus was on exploring their own ideas in new settings, and within new restraints.

So the residency has finished, and they’re finally back in their own beds, but keep an eye out for continuations of this project, as it shows no signs of being over.

Or as Eilis put in on their project blog: “I did always maintain that I would be driven on this exchange by thought and making rather than producing the end ‘product’ in time for the closing Exhibition.” A sentiment I’m fairly sure they share.