Six Memos is an exhibition of twenty artists from the European CreArt Network, one of the last ongoing European art projects with Liverpool.

Italo Calvino’s essay, Six Memos for the Next Millennium, is one of the most influentially significant works of literature of the 20th Century, but no one really knows it, and most don’t know him as a novelist either. So an exhibition of artists from all over Europe coming together to reflect on his work was always going to need some explaining. To the point that Olivia Walker, Exhibition Manager for Six Memos produced the following statement [red italics] as a hand out to give visitors a breakdown of where the artists were coming from.

Against that, I’ve tried to break down the exhibition for myself, as a Calvino first timer with a mild recollection of the essays from University [plain text]. The outcome might not be wholly reflective, but that’s the joy of the exhibition – it’s from a slightly academic perspective, but as a result represents the different strengths of academia across Europe. Where in the UK we might find a stifled creative education, held back by the tension between attainment and creativity, across Europe, attainment is based in production rather than ideas, and justifying creativity isn’t so high on the agenda. In simpler terms, academia isn’t quite so academic elsewhere.

In 1985, Italian novelist Italo Calvino was due to deliver a series of lectures at Harvard University outlining his vision for the future of literature. He died before the series was delivered, with the last lecture left unwritten. In 1988, the five completed works were published as a collection of essays entitled Six Memos for the Next Millennium.

In 2019, unrelated artists from eight European cities set out to evidence six strands of an idea by Italo Calvino. The ideas they focus on are Lightness, Quickness, Exactitude, Visibility, Multiplicity and Consistency.

In 2019, thirty-one years on from the publication of Calvino’s essays, what is clearer than anything else in this exhibition is that rather than representing the ideas of Calvino, they translate them into the present day.

All six essays could most succinctly, in today’s English, be described as readability and legibility. One, historically the role of the writer, the other, of the artist. Today, both artist and writer have an equal part in telling a story in a way where visual and mental images live side by side.

In the following few paragraphs I’m hoping not to talk in too much detail about individual works in the show, but instead reflect on their ability to accurately describe Calvino’s original points that inspired them.

The values Calvino outlines are as follows:

When Calvino talks about “Lightness” he is referring to the ability to remove unnecessary complications so that the essential idea can emerge, without stripping an idea back so much that it loses its substance.

Victor Hugo Martin Caballero’s Geografia Espejo [translation: Geography Mirror] represents this, or the contemporary version of this, most clearly. The work is stripped back to the bare essentials, establishing a dialogue with the viewer which is communicated easily through its beauty.

Lightness is actually quite difficult to assign to the end product of visual art, but in doing what in science is referred to as empirical adequacy – presenting just what must be shown, to prove enough to share an idea – the artist clearly understands the symmetries between the written and visual word.

The concept of “Quickness” is concerned with the way an artist might control the pace of a narrative. In the case of a piece of visual art, it’s helpful to think about how quickly the ‘meaning’ of the piece reveals itself.

Now Quickness is unusual, especially when discussing positive developments, because for the most part, artists want their audience to build a relationship with their work, not understand it entirely in seconds.

Where this may actually prove useful, and may have been Calvino’s drive to include it in his memos for this millennium, is the joke.

For art, the joke is invaluable. It is a route in for audiences who are unfamiliar with fine art. It creates a bridge of understanding, which tears down intimidating walls and shows viewers that art can in fact be funny above all else.

Tjasa Kalkan’s Dialogues (no.1 and 2) are the clearest representation of this, not entirely clear, but clearly considering how the audience will respond or relate to the subjects. The gentle surreal humour drawn out of the everyday scenes is immediately enjoyable, and the absurdity of the human relationships to space is soon relatable. 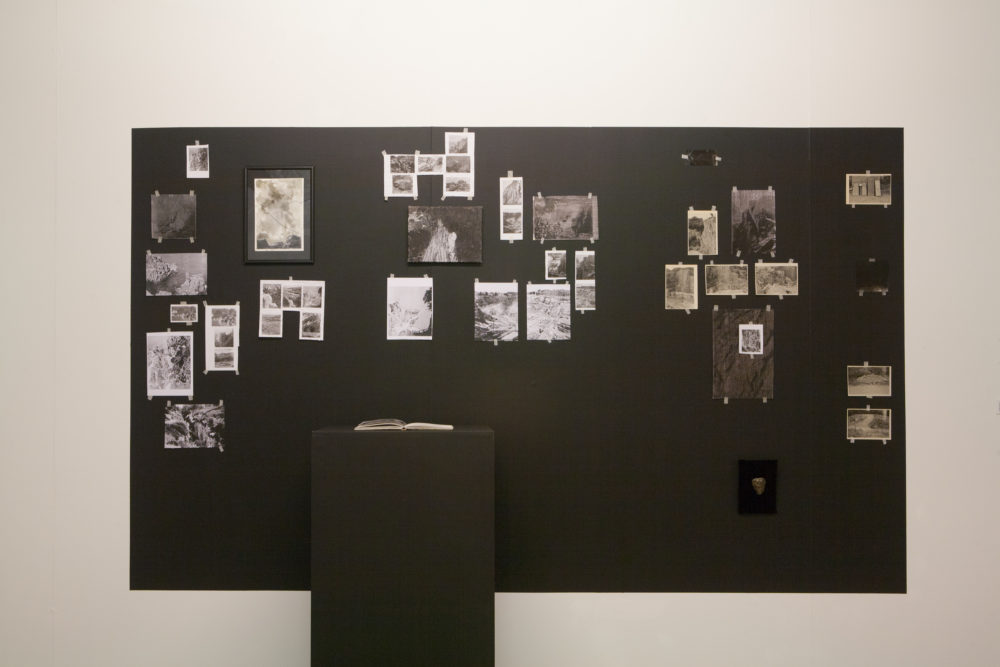 “Exactitude” is probably best described as precision. It’s the ability of an artist (in Calvino’s case he has a writer in mind, here we are thinking of a visual artist) to plan and execute an idea in the clearest possible way.

Ludomir Franczak does just this, placing simplicity and clarity at the heart of his work.
All ideas, regardless of their scale, have one thing in common; they are all more valuable if they can be explained. And quite contrary to the prospect of Lightness, Exactitude is achieved by ensuring everything is presented that could possibly support the explanation.

The confident multimedia display is almost forensic in its presentation, using text and image with equal impact.

When referring to “Visibility”, Calvino is talking about the ability to not only build a visual image but a mental image. Mental images have the potential to stick around longer than a visual one, and can also create a far bigger picture than the one you see on a gallery wall.

Authors and artists have more in common now than in the 1980s, particularly in this case. From the perspective of the artist, the boundary between visual and mental images has been blurred ever since expressionism. For writers, expressionism is an ambition more than a requirement.

Near enough everything on display, as is the nature of European art, is more than a visual image.

The concept of “Multiplicity” is all about ambition. The more ambitious an idea is, the more can come from it. Not only can multiple strands of philosophy, science history, and culture go into one piece of art. But multiple concepts and ideas can spring from the work.

If ambition is key to this essay, then Laura Robertson – one of Liverpool’s two artists in the show – explores this most keenly.
It’s a very British kind of ambition to represent as much as possible, with the utmost clarity. Often, misplaced, the ambition of 21st Century art is to tell every story possible, leading to constant wrong turns.

In this case, far from misplaced, Laura Robertson sets the pace for the exhibition, through delivering historical and artistic context. And contextualising an exhibition like this is an inescapable necessity.

30 years after the publication of Six Memos and 19 years into the millennium Calvino refers to, this exhibition gives us a chance to reflect on the current state of European contemporary art as it relates to these values. It encourages us to look forward, while we look back on our common heritage, imagination, and humanity.

It would take far more will power than I have to avoid the obvious here. There is a clear sense of loss in this exhibition, which is part of one of the last creative European projects that Liverpool still engages in. There is a fond anticipation of losing shared heritage and imagination which has defined British culture and European culture as one and the same.

But somehow, as we move closer to March 29th, Six Memos seems like a very very essential exhibition.

Review: The View from the Top of a Pyramid –...