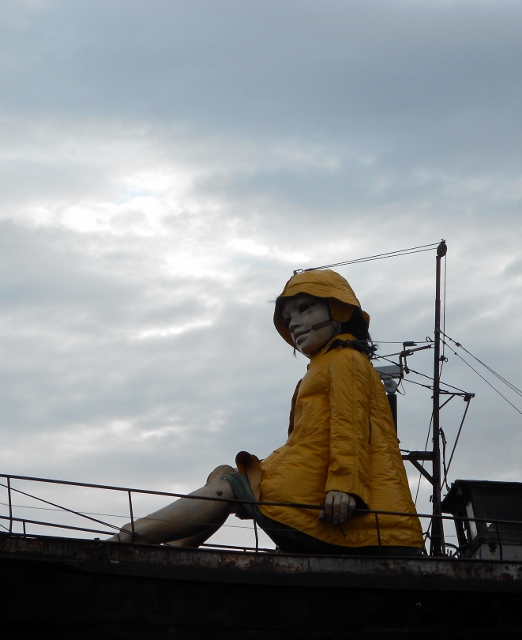 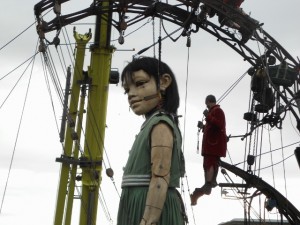 For months, the city has eagerly awaited the arrival of Royal de Luxe’s Giant Spectacular: Sea
Odyssey and the anticipation was electric as the crowds of thousands huddled against the cold all weekend to witness this awe-inspiring event.

The local community, along with hundreds of tourists came together to watch the story of the Little Girl Giant unfold, as she travelled around the city in search of her father. The tale began on Friday 20th April when the Uncle Giant emerged from the Mersey, after 100 years searching the sea bed for
his long lost brother, who died on the Titanic, leaving behind a letter that must be delivered to his daughter. The story is simple yet magical, and reminiscent of a fairy tale, making it highly accessible and enjoyable for the audience, yet with enough scope to showcase a fantastic piece of street theatre.

One would think that this spectacle had come from another world, not just from across the channel: the puppets were absolutely beautiful and the ingenuity of design and performance demonstrated over the three days was unparalleled. The Little Girl Giant was ethereally elegant, and the team of technicians and puppeteers working to bring her to life managed this great feat with grace, as her movements flowed as if part of a ballet. Her timber face enhanced her magical, otherworldly appearance, and the animation possible with her eyes and mouth made her seem both delicate and human. Once walking, the Little Girl Giant was surprisingly quick and this reflected the urgency of her quest. 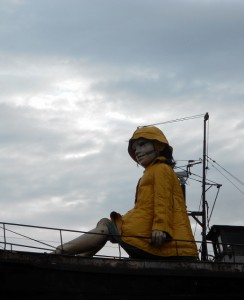 The Little Girl Giant measured 30 feet and far from terrifying, her size reinforced how forlorn she was, separating her from the crowds, making us acutelyaware of her isolation. Being so tall also meant that  audience members of all shapes, ages and sizes were able to see this spectacle; a triumph of street theatre art for director Jean-Luc Courcoult.

Whilst she roamed the streets on foot and in her boat, her pet Xolo, a large black dog, was brilliant as a comic sidekick and diverted the audience from the solemnity of the story, to bring humour  and comedy to the masses, teasing the crowd with his playful movements and jolly musical accompaniment. The detail of this puppet was incredible: his nostrils flared, his ears and tail wagged happily and his mouth opened to reveal a long and cheeky tongue, a huge crowd pleaser.

At all times there were multiple entertainments taking place, and this created a world in which the audience were free to make their own decision as to what to watch and whom to follow, creating exciting possibilities for all, and the sense that everyone could be a part of the adventure taking place. 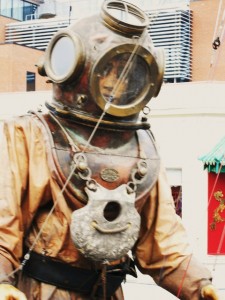 The most impressive of the puppets by far though, was the Uncle: at a staggering 50 feet tall,
he towered over Liverpool’s streets and dwarfed its citizens. I witnessed his journey from Berry Street to the King’s Dock on Saturday evening, and his silhouette against the evening sky as he was reunited with his niece by the river was truly magical. Marching down Berry street, accompanied by a live band playing jazz and soul hits, the Uncle brought with him a sense of celebration, as the crowds realised he would soon achieve the purpose of his quest. The music created a carnival atmosphere and his crane lift over the famous Chinese Arch, accompanied by the Mission Impossible theme tune was genius. Particularly impressive was the Uncle Giant’s appearance, including an antique diving helmet and heavy boots which thundered down the street, yet he too was supernatural rather than fearsome, despite his enormous presence.

The ‘Lilliputians’ deserve a special mention, as their enthusiasm was infectious, and their
costumes sublime, echoing the sea faring splendour of a largely forgotten era. This team of 110 puppeteers and crane operators delivered a mesmerizing show over the 23 mile journey through the city, which captured the hearts of the estimated 600 000 spectators across the weekend.

In a year when the nation’s attention is turned to London for the 2012 Olympics, it is fantastic to see that Liverpool continues to reign as the UK’s culture capital, expanding the boundaries of art as well as bringing the community together to remember such an historic event.