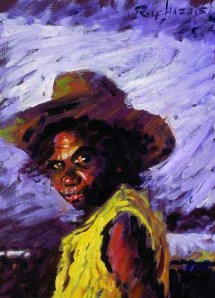 I must admit, that before attending Rolf Harris’ new exhibition at the Walker, I had a lot of pre-conceived ideas about him as an artist. Harris is known in popular culture not just for his artwork, but for his musical hits, and status as a TV personality. For someone like me, who was more familiar with his showbiz alter ego, this exhibition, and most notably his early work, was truly enlightening.

The floor plan of Can You Tell What It Is Yet? was frustrating to me, because his most famous, and ultimately least creative and least interesting works were placed at the front, with his early work, including landscapes and portraits further back. I can understand that the curators of the exhibition realise that his pieces for Rolf on Art and his infamous portrait of the Queen are the most recognisable, but for me, they are far from his best.

Upon entering the special exhibition space, visitors are greeted with a beautiful installation of a grand piano, painted in Rolf’s classic impressionistic style with an Australian landscape: gorgeously decorated with an amazing array of colours, the piano captures the attention instantly. Less can be said for the numerous vinyl sleeves and concert flyers that adorn the walls, and the constant references to ‘his smash hit Tie Me Kangaroo Down, Sport‘ grow somewhat tiresome when one considers how the Walker can call Harris a musical legend based on only one song.

The next room features his iconic portrait of Queen Elizabeth II, which I must admit I found quite lifeless and unlike the woman herself. The other paintings in this section were all from his TV series Rolf on Art and were pleasant enough, but the best was yet to come…

My favourite sections of the exhibition were People Observed and Australia and Travel. In the People Observed room were some fantastic pieces of work, my favourite of which was Arnhemland Girl, which Harris also refers to with pride in his interview for Walker Art Gallery (which can be found on the home page of the website at http://www.liverpoolmuseums.org.uk/walker/). This painting captures an extraordinary expression on the aboriginal woman’s face, halfway between curiosity and disgust, and this is what really solidified the work as a masterpiece for me. Portraits, historically, depict their subject looking regal, elegant or powerful, and the effect of Arnhemland Girl on the viewer is completely different, yet utterly captivating. 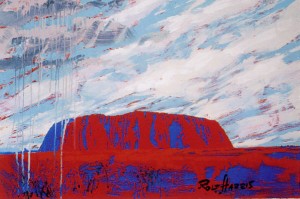 -What really struck me about Harris’ method throughout the exhibition, was how he chooses to work from a photograph. He admits that creating a painting with a sitter, or subject alive in front of him is impossible, and so uses this practical method instead. What is interesting, though, is how the end result is a product of both the photograph itself, and memory. This is most apparent in Blossoms in the Back Seat, a painting realised from a photograph of his friend, and the piece captures both the accuracy of a photograph, with the emotion of memory.

Other paintings I particularly loved from this part of the exhibition were First Love and Young and Old, both of which were meditations on life observed by Harris from afar. The final painting in the exhibition Coffee and Cola for the Lads was a piece by Harris from 2012 on his visit to Liverpool to put together the exhibition, and entirely captures the life and enthusiasm of a group of men outside a bar. This painting reminded me of the earlier People Observed paintings, and suggests that Harris may return to more humble subjects, rather than famous faces in his next work.

Australia and Travel was another captivating part of the exhibition: Harris’ signature style using a broad brush with emulsion paint is fully explored over huge canvases, including a triptych entitled Banjo Patterson writes Waltzing Matilda. Huge paintings such as these, created with giant, fluid strokes of the brush and explosions of colour, depict scenes from Harris’ homeland, mostly, he admits, from memory. My favourites among these include Raining on the Rock which is an enormous depiction of Ayers Rock, composed of reds and pinks, framing the iconic landmark against an expanse of sky, and a weeping tree in the foreground developed from splashes of paint, reminiscent of the work of Jackson Pollack.

Other stand-out pieces from this section included Barcodes Venice, an image interesting in terms of composition, framing the river in a portrait orientation, suggesting the lingering evening light, rather than presenting the landscape piece in the traditional format. A quote from Harris appears on the wall here, which reads “I’ve used my surroundings as models for all my landscapes”, which suggests his interpretative style, drawing on all of his extensive travels to create each piece. Harris’ landscapes are some of his best work, and whether the subject be a street in London, a Greek marina, or the white cliffs of Dover (rendered here in pink), his work demands attention and critical discourse.

I thoroughly enjoyed this exhibition, however, would have preferred a stronger focus on Harris’ early work, as I felt that this conveyed stronger emotion as well as more original style and creativity. An interesting thought to leave visitors with occurs on the way out, where there appears a timeline of images explaining how Harris works; from a photograph, through many layers of paint, finally culminating in the finished product of the steps of the Walker Art Gallery in his infamous ‘unfinished’ style. His process is intriguing, and his work striking, and the exhibition explores the true artistic master behind the TV personality.

More of Sinead’s writing can be found on her blog http://teafortwotalk.wordpress.com/