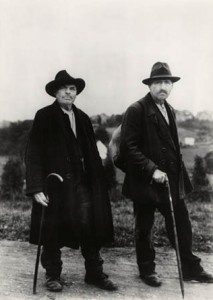 Sander/Weegee, part of The Bluecoat’s programme for regional photography festival LOOK/13, brings together two of the most prolific photographers of the twentieth century; August Sander and Arthur Fellig.

August Sander was a German portrait and documentary photographer, whose work here spans the 1920s-30s. Famous for his portraits of German society, Sander published his first book Face of Our Time in 1929, showcasing much of his best and most original work.

Sander’s work on display at The Bluecoat incorporates the scale and human interest of his photography: not just interested in the German elite, Sander photographed many working class subjects, including teachers, farmers and gypsies. Perhaps the most striking image of his is ‘Angelhöriger der Leibstandarte Adolf Hitler’ (member of Hitler’s S.S. Bodyguard). This image captures the smug self-importance of a powerful and dangerous young man, whose youth perhaps hints at the brainwashing rife in Hitler’s regime. Next to this image, is a photograph of ‘Landstreicher’/Tramps (1929 – pictured, right) which conveys a carefree attitude from the subjects, who are clearly destitute compared with the S.S. guard on the right, but infinitely more appealing to the viewer despite their obviously impoverished appearance.

Some of Sander’s pieces can be viewed as humorous, like the Small Town Innkeeper and his wife, whose uncannily similar appearances make them look like a pair of Lewis Carroll caricatures. Other images illustrate the gulf between rich and poor in 1930s Germany, maing Sander a great documenter of social history. 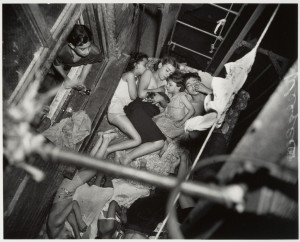 Athur Fellig (nicknamed Weegee, after the Ouija board, as he was known for his suspiciously foresighted arrivals at crime scenes only minutes after an emergency) was an American newspaper photographer famous for his gritty images of New York in the 1930s and 40s.

Weegee’s work illustrates the dark underside of a city which hid poverty and crime under a mask of glamour and prosperity. His photographs often depict immigrants and other low-income minorities, who are the victims of terrible tragedies, including tenement fires, murders and petty crime. Weegee’s images are shot in stark black and white but their depth and depiction of raw human emotion is more vibrant than technicolor.

Many of his subjects are the perpetrators of heinous crimes, including gangsters and other ‘infamous’ underground city dwellers, shielding their faces from the lens, whilst photographs of contemporary transvestites lap up the attention of the camera as he captures their late-night escapades from the back of a police wagon.

In other images in the exhibition, Weegee captures the bustling atmosphere and vivacity of everyday life in New York. Crowd at Coney Island (1940) depicts millions of revellers out in the sunshine, and is ironically described by the photographer as a ‘quiet Sunday afternoon’. Weggee certainly had a knack for creating images of city life in full swing, photographing couples absorbed in each other on a park bench, or a bagel-seller walking to work in the early morning. His talent for portraying life as we know it earned him notoriety and a lasting reputation as one of the twentieth century’s most iconic documentary photographers.

Sander/Weegee is on at The Bluecoat until 14 July 2013 and is definitely a must-see exhibition.