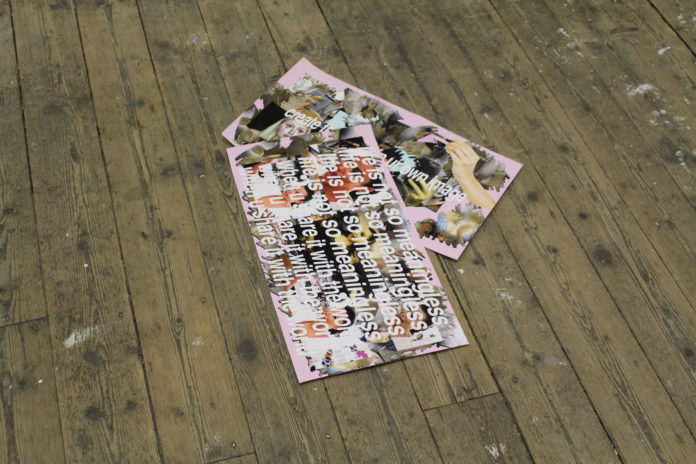 You and I are like that red wall…
Crown Building Studios

You and I are like that red wall… is an exhibition guest curated by Jade Annaw and Emily Simpson, hosted on isthisitisthisit‘s online gallery space, and screened by Crown Building Gallery and Studios, Liverpool. The exhibition deals with self-written character failure, the effect of social media and how popular culture and its leading ladies create both saturated egos and a false sense of anxiety.

Idolising celebrities through their social media imagery and grasping for our own version of that fame is the focus in paint me like one of your millenial girls by Lois Hopwood and Purple Dreams 1 by Harakirina and Manuel Minch. In the former, the viewer is told that ‘life is not so meaningless … when u share it with the world’. In the latter, the artists play with dress, environment and lavishness to form a video which feels oddly familiar, like staged selfies, but with an exaggerated edge. The subject of the photo seems godlike through their lavish surroundings.

The honesty in these works of the anxiety and dependency we have to online personas is refreshing. It’s a constant renegotiation, something which gives us something to focus in the back of our minds on while larger portions of our mental energy are devoted to work, or home life, or education, or politics, or all/none of the above. It’s a series of small considerations which quietly operate in the offline world. Whether this is good or bad is entirely dependant on a person’s online persona and how much it promotes personal growth and self-care.

Dependency on the physical technology is pushed to an extreme in Roxman Gatt’s Fast and Cool. This poem completely sexualises a laptop. Such lines as

‘All you need is a ‘light touch,
and already you’re emitting data,
that goes straight to my heart and c**t.

I put you to sleep, but I can’t handle,
not seeing your brightness that lights up
my bedroom so sweet.’

It’s a beautiful play on the male-dominated tech industry’s preoccupation with specs and the latest machines. It also is horrifyingly relatable – falling asleep next to a laptop or tablet or phone is a common occurrence for most of us. Fast and Slow reminds us of the absurdity of something which quietly became normal.

The exhibition reveals the use of digital identities and technology as an escape mechanism. It is honest about the short comings of this while also being honest that these are ways for humans to cope. While I couldn’t attend the film screening, I think it was important to have a physical manifestation of this exhibition, as these problems need psychological distance or a different perspective to be seen for what they are. Socialising in person is a balm for online alienation. Moving forward, this research should also include women of colour and trans-women in order to make sure it really represents all millennial women and not just white cis- women. Gender expression and ideas around femininity are important parts of exploring how we present ourselves, and while this exhibition deals with the hyper-feminine, I would love to see this idea pushed further.

The exhibition can be found on isthisitisthisit.com