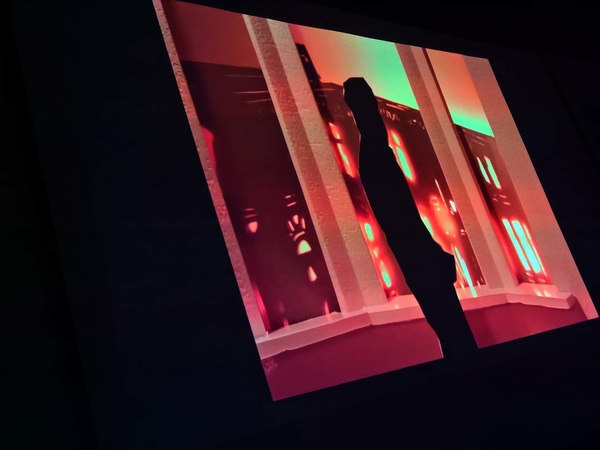 Ghost Mural, a clever idea which you might have heard of recently, has been projected on the gable end of terraced houses that have undergone over ten years of demolition. It highlights a part of Anfield that stands tall and defiant, urging passers-by to remember what once was. The artist behind the mural, Jayne Lawless, had long wanted a chance to create something permanent but, with the ongoing community struggles, couldn’t find anywhere permanent enough to house it. The projected mural was developed as an artefact which would never be removed; something far more permanent than the homes it so longingly recalls.

And that’s powerful enough in itself. The addition to this mural on a wet and windy Friday night, in one of the best smelling bakeries in Liverpool, was a film, ‘Without These Walls’, produced by Jayne Lawless and Janet Brandon. It provoked emotional responses from residents and visitors alike, and had more than a few grown men in tears.

The film by Janet Brandon, took an extraordinary level of skill to collage together, and a dedication to found and taken footage of the demolition of the very houses it portrayed. And while it is not immoral for a man wearing high vis to do his job, the decision that led to his job being necessary is; a decision that forced families from habitable homes, which rings eternal in the haunting 1960s terrace chant:

“A fella from the Council, Just out of Planning School,
Has told us that we’re being moved right out of Liverpool,
They’re sending us to Kirkby, or Skelmersdale or Speke,
Don’t want to go from all we know in Back Buchanan Street”.

Brick and mortar are one thing, but what this film shows us are curtains, and wallpaper; bedrooms and doors; staircases and furniture. As difficult as it might be to defend a demolition action on houses, it’s far more difficult to justify that action on homes. Unfortunately, it’s too little too late and the only reason we have that footage is because the JCBs turned up in the first place. And, with a little luck, it might provide an opportunity to open a few eyes before this happens again.

The film, which uses collaged images of the old houses to create a diorama of the four demolished streets, and audio recordings of families from the area, is a masterpiece in complex analogue techniques; using hands on approaches to create something that could take weeks to do digitally, and with a far more profound effect. But the point at which the JCB takes its first chunk of brick down, revealing wallpaper from children’s rooms and master bedrooms, and leading us down the stairs into what looked to be a vibrant and well lived in space on the ground floor, that’s the point where anybody watching the film had their heart in their throat.

The film should be touring around various places, and I wouldn’t be surprised if it ended up gracing a screen somewhere permanently. It sums up a time in Liverpool’s history that reshaped how we function as a community; and irreparably tarnished our opinion of Housing Market Renewal. It still happens, and won’t likely stop any time soon, but the feelings of the families from Anfield are well known now, so rather than struggling to be heard, a precedent has been set where communities now get to fight for their homes. Ghost Mural, and the accompanying film provide an emotional insight which creates a relatable platform for re-educating ourselves on the value of community.

Ghost Mural / Without These Walls
1 of 4

Review: Space is The Place, Patric Rogers & Angelo Madonna at...