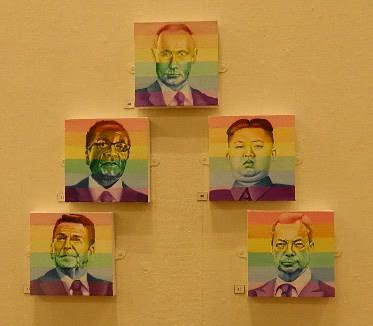 The Wirral Met Fellows Show 2015 features works by Rachel Perry, Anna Clark and Jay Chesterman and there is a strange cohesion that belies the varying subject matters pursued by the artists, finds Breda Whyte, as photography has provided inspiration or become a tool included in the art works themselves.

Jay Chesterman’s works deal with the prevalence of celebrity and the selfie. Jay is a polished artist who has a great eye for colour and atmosphere, and there is a real sense of layers going on in his adapted images. His pieces on the “Ice Bucket Challenge” are seconds captured in time, and convey the coldness of the water, but there is also something else, something not quite tangible, in these images that are open to the viewer to interpret. I loved the anonymity of the subject, the blurred faces and how he turns the whole proliferation of such images on their head, where the promotion of the self and the actions that help with this promotion, become obscure and unidentifiable.

His most openly political pieces are his rainbow portraits of political leaders. There is humour here, and his point is subtly made, but very well made. These are small works grouped together as a set featuring Putin, Reagan, Mugabe, Farage and Jong-Un. The simple yet ingenious overlay of rainbow colours on top of these faces, which could be official portraits, again brilliantly subverts the subject matter, and plays into the layering of his work.

Rachel Perry got her inspiration from photo albums she came across from her family which featured images of family members who had fought in World War 1. This has led her to research this part of her family history.

Rachel has a very delicate touch and has created a poignant memorial that is thought provoking and emotive. Her works are generally small, in a range of media, and somehow this makes them even more effective. Most of her pieces are monochrome but the most dramatic are the three small embossed white images of individual soldiers, which look like traces left of the individuals depicted, as if they faded out in front of your eyes, a temporal halt to their lives happening. These three pieces in particular, convey the individual cost and futility of this war, and the missing generation that comes with it.

Anna Clark uses photography as a base to her paintings, capturing moments, fleeting and transient. Her work here represents images from one train journey and has a wonderfully voyeuristic quality, offering a desultory and slightly uneasy vibe. These are modern urban landscapes, and are executed in a way that makes one wonder what is going on behind the buildings, beyond the tracks. Some of the images look like desolate places and are great fodder for the imagination; there are many stories one could make up about these landscapes, and Anna has a great ability to create images that arouse curiosity and makes one want to know more, making the viewer into a voyeur like herself.

Then in the midst of these bleak landscapes, Anna surprises with a painting that is joyous. It is still an urban landscape, but is like an oasis of peace and calm on this journey. It is a fleeting respite, and sings all the more clearly because of this. It has a wonderful harmony and is reminiscent of Egon Schiele and Peter Doig.

What is wonderful about this whole exhibition is the effect, importance and impact of colour, its absence and its vibrancy. Jay delights us initially with his colourful palette that belies the layers of meanings and interpretations of his works, whilst Rachel creates a wonderfully powerful commemoration that is thought provoking using the absence of colour, and Anna masterfully and subtly manipulates the viewer’s emotions and reactions with a muted palette that suddenly explores with the introduction of brighter colours.